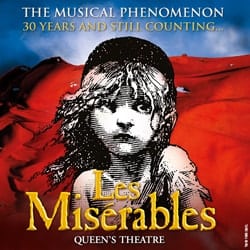 From Monday 11 June 2018, there will be major cast changes at the West End production of “LES MISÉRABLES” at the Queen’s Theatre, which is now in its record-breaking 33rd year.

Cameron Mackintosh is delighted to announce that Dean Chisnall will star as ‘Jean Valjean’; Toby Miles as ‘Marius’; Elena Skye as ‘Eponine’; Vivien Parry as ‘Madame Thénardier’ and Amara Okereke as ‘Cosette’.

Continuing in their roles are Steven Meo as ‘Thénardier’ and Carley Stenson as ‘Fantine’.

David Thaxton continues to play the role of ‘Javert’ until Saturday 21 July, with Bradley Jaden starring as ‘Javert’ from Monday 23 July 2018.

Further casting to be announced soon.

Dean Chisnall’s most recent theatre credits include the UK tour of “Blood Brothers” “The Secret Diary of Adrian Mole Aged 13 ¾ The Musical” at the Menier Chocolate Factory; “Working” at the Southwark Playhouse; “Shrek” at the Theatre Royal Drury Lane and UK tour; “Love Never Dies” at the Adelphi Theatre; “La Cage Aux Folles” at the Playhouse Theatre and “Never Forget” at the Savoy Theatre.

Bradley Jaden is currently appearing as ‘Fiyero’ in “Wicked” at the Victoria Apollo Theatre. He returns to “Les Misérables” at the Queen’s Theatre having originally played ‘Enjolras’ in the 30th Anniversary cast. His other theatre credits include: the UK tour of “Ghost The Musical”; “Shrek The Musical” at Theatre Royal, Drury Lane; “The Blues Brothers” at the Edinburgh Festival and Stiles and Drewe’s “Peter Pan” at the West Yorkshire Playhouse. His TV credits include “Emmerdale” on ITV and “Sugar Rush” on Channel 4.

Toby Miles has recently graduated from Arts Educational Schools, London and will be making his professional and West End debut in the role of ‘Marius’.

Elena Skye has just finished playing the role of ‘Lauren’ in “Kinky Boots” at the Adelphi Theatre having made her West End debut in the production in 2016.

Vivien Parry’s most recent theatre credits include: “Half A Sixpence” at the Noël Coward Theatre, “A Christmas Carol”, “Twelfth Night”, A Midsummer Night’s Dream”, and “The Shoemaker’s Holiday” for the Royal Shakespeare Company; “The Girls” UK tour and “Top Hat” at the Aldwych Theatre. Other previous West End credits include: “Mamma Mia!” at the Prince of Wales Theatre; “Fame” at the Cambridge Theatre and “Blood Brothers” at the Phoenix Theatre. Her film credits include Disney’s “Beauty and the Beast” in 2017.

Carley Stenson’s West End credits include ‘Elle Woods’ in “Legally Blonde”, ‘Princess Fiona’ in “Shrek The Musical” and ‘Lady of the Lake’ in “Spamalot”. Carley also starred as ‘Christine Colgate’ in the tour of “Dirty Rotten Scoundrels”. She is probably best known for playing the regular role of ‘Steph Cunningham’ in Channel 4’s Hollyoaks, for which she was nominated for several awards during her 10 years with the show.

Steven Meo’s previous theatre credits include “Pride & Prejudice” at Regent’s Park Open Air Theatre and on UK tour; “The Taming of the Shrew”, “Boeing Boeing”, “Portrait of the Artist as a Young Dog” all for Theatre Clwyd; “The Distance” for Sheffield Crucible/Orange Tree Theatre and “Flesh and Blood” for Hampstead Theatre and on tour.

David Thaxton previously played ‘Javert’ in 2014, and has also played the role of ‘Enjolras’ in “Les Misérables” at the Queen’s Theatre. His additional theatre credits include ‘Giorgio’ in “Passion” at the Donmar Warehouse, for which he won an Olivier Award for Best Actor in a Musical, ‘Pilate’ in “Jesus Christ Superstar” at Regent’s Park Open Air Theatre, ‘Raoul’ in “Love Never Dies” at the Adelphi and ‘Major John Howard’ in “Only The Brave” at Wales Millennium Centre.