Griff Rhys Jones to star as Scrooge in London Musical Theatre Orchestra’s concert version of A Christmas Carol at The Lyceum Theatre on 10th and 17th December 2018.

Following sell-out performances in 2016 and 2017, the London Musical Theatre Orchestra returns to the Lyceum Theatre for three performances of their critically and popularly acclaimed concert production of Alan Menken, Lynn Ahrens and Mike Ockrent’s A Christmas Carol.

A Christmas Carol will star one of Britain’s best-loved entertainers: comedian, actor, writer and producer Griff Rhys Jones will play Charles Dickens’ great miser Ebenezer Scrooge. Griff Rhys Jones has been a household name since the 1980s and is currently touring Australia with Griff Rhys Jones: The Unexpected Traveller.

Speaking about taking on the role of Scrooge in A Christmas Carol, Griff Rhys Jones said: “I’m delighted to be getting to play my hero, Scrooge. I have based a lot of my current life choices on him. Dickens made a huge impact on our whole idea of Christmas with his little book, “A Christmas Carol”. It has justly been a favourite ever since and this is a brilliant and moving musical version. I am working alongside a talented and enthusiastic group of performers and musicians who make up the London Musical Theatre Orchestra. I’m very much looking forward to going on that uplifting journey that Scrooge takes on that fateful Christmas Eve and hope people will enjoy the concert as much as we will enjoy performing it.”

Joining Griff Rhys Jones as Ebenezer Scrooge, will be Lucie Jones (Legally Blonde / Eurovision 2017) as Emily / The Ghost of Christmas Future, Rosemary Ashe (The Witches of Eastwick / The Phantom of the Opera) as Mrs Fezziwig, Nicolas Colicos (The Producers / The Bodyguard) as Mr Fezziwig, David Hunter (Kinky Boots/ Once) as Bob Cratchit, Miriam-Teak Lee (Hamilton / On The Town) as The Ghost of Christmas Past, Cedric Neal (Chess / Motown) as The Ghost of Christmas Present, Jeremy Secomb (Les Misérables / Sweeney Todd) as Marley, Caroline Sheen as (Mary Poppins / Chitty Chitty Bang Bang) as Mrs Cratchit and Jon Tarcy (Titus Andronicus / The Sound of Music Live) as Fred Anderson.

Due to exceptional demand, a matinee performance has been added at 4pm on Monday 17th December. Tickets for all three performances are on sale now. 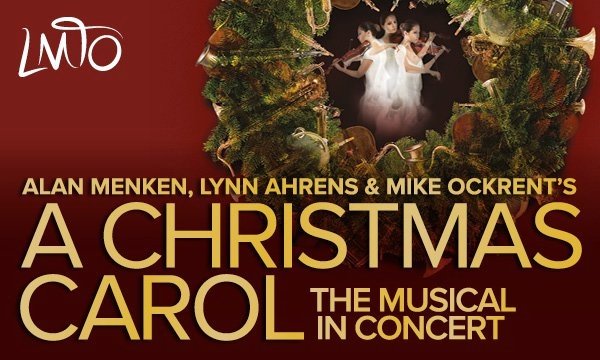 Founder Freddie Tapner said: “Griff Rhys Jones has long been a hero of mine, and so to have him coming to play Scrooge is incredibly exciting. I can’t wait to see what he does with the role – and in a first for LMTO, audiences now have three chances to see him in action. Bring on the 10th December and those opening chords of the Overture.”

Shaun Kerrison returns to direct this hit production, with sound design by Nick Lidster and Avgoustos Psillas and lighting design by Mike Robertson. The concert is executive produced by Clive Chenery for LMTO and general managed by Peter Huntley for Smart Entertainment.

LMTO’s concert version of A Christmas Carol follows their triumphant performance of Lerner & Loewe’s Camelot at the London Palladium and Martin Smith’s King at The Hackney Empire earlier this year, as well as Mack and Mabel at The Hackney Empire, Bernstein’s Candide In Concert at Cadogan Hall in 2017 and a sell-out five-star 2016 season. LMTO’s production of Howard Goodall’s Girlfriends will be performed on Friday 2nd November and Saturday 3rd November and stars Lucie Jones, Lauren Samuels, Bronté Barbé, Natasha Barnes, Vikki Stone and Rob Houchen.

After sell-out runs at Hope Mill Theatre, Manchester, and The Park Theatre, London, in 2022, Maureen Lipman returns to the West End with a performance … END_OF_DOCUMENT_TOKEN_TO_BE_REPLACED

THE PHANTOM OF THE OPERA at Her Majesty’s Theatre today announces Jon Robyns as ‘The Phantom’ from Monday 3 April 2023, Holly-Anne Hull as ‘Christine … END_OF_DOCUMENT_TOKEN_TO_BE_REPLACED

2023 marks the 50th Anniversary of the legendary smash hit musical The Rocky Horror Show, as it continues to play a newly extended tour through 2023 … END_OF_DOCUMENT_TOKEN_TO_BE_REPLACED