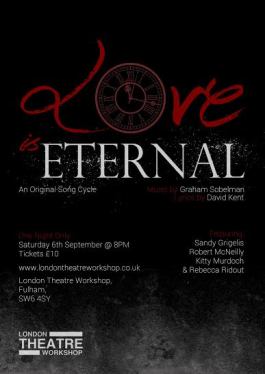 LOVE IS ETERNAL is a collection of songs set throughout time. From the happiest day of your life to fleeting bitter memories and from vampire lovers to drag queens, everyone has their own experiences with love. These contemporary art songs traverse the many worlds of love and loss and explore the parallels across these stories.

Stylistically, this collection could be considered a pop-music cousin to works by Ricky Ian Gordon or Adam Guettel. Written for two men and two women, it currently has orchestration of piano and cello (expansion into a 4-5 piece band is expected). Lush harmonies and quirky lyrics conceal the underlying complicated rhythms and musical intricacies.

These stories are separate, self-contained tales, sharing the joys and sorrows (and comedy) of love. There are, however, thematic ties throughout the piece, both lyrically and musically. A lullaby from a gay father to his child, a man lamenting the loss of his pet, and a polygamist having it out with his wives; this song cycle reaches far and wide in its quest to determine that love is, in fact, universal.

As a composer, Graham is just finishing a song cycle for soprano/piano, utilizing 30 poems of Emily Dickinson, set to premiere in late 2014. He has also written underscoring for A Tale of Two Cities and Orlando for SacImpulse Theatre. He was commissioned in 2012 to write a piece for the Sacramento Gay Men’s Chorus, called Voices Carry. Graham co-wrote 10 of the tracks on This Is Ain’t Betty with former band, Ain’t Betty.

DAVID KENT has written songs for the UK cabaret star Morag McLaren; his material has been performed widely in the US, with his songs appearing at Yale’s International Cabaret Conference, New York’s Don’t Tell Mamas, San Francisco’s Martunis and in Miami.

In 2011, he wrote the music and lyrics to the hit Edinburgh Fringe musical Uglies Do Edinburgh, and this work (book co-written with Dereck Walker) was awarded 5 stars by The Scotsman. In 2012, a one-man show of his songs, Welcome to My World, starring David Meulemanns went on tour in the US state of Florida, then transferred to London (The Pheasantry). In February 2013, a staged workshop of the musical Glorious, Loyal and Brave was performed by the sixth form at Tring Park School for the Performing Arts. He wrote the music and lyrics for this work, with the book written by Mette Jensen. In August 2014, his musical (book, music, lyrics) The Next Big Thing garnered 4-star reviews at the Edinburgh Fringe Festival.

GRAHAM and DAVID met in the summer of 2012 in San Francisco, performing together in a cabaret show at Martuni’s Piano Bar. Determined to do a long-distance writing project, they decided on telling love stories from different periods in time. David wrote lyrics and emailed them across the Pacific.

Graham set these stories to music and hence was born: Love Is Eternal. Or is it all a LIE?

Rebecca Ridout says: “I met David Kent when I was cast in The Next Big Thing which was going to Edinburgh this summer. There I met Graham Sobelman and heard his music.

As a great supporter of new writing I was keen to get the piece seen and I think Graham’s writing offers something different than a lot of the new American writing that makes it across the pond.

Whilst in Edinburgh we performed a number at Twenty Something’s concert series ‘Platform LDN’ which is for new American writers. The feedback was overwhelming and it stirred a lot of interest for our concert on the 6th September – which is very much a concert reading and an exploration of the music – it’s a very new piece so is open for criticism and opinions! We just wanted to get it heard in the UK and maintain a platform for new writing and also young performers.”

The Walt Disney Company UK and Ireland has today announced the full cast for the UK and Ireland tour of the landmark musical THE LION KING, including … END_OF_DOCUMENT_TOKEN_TO_BE_REPLACED

A young Jewish physicist and an activist poet meet at a party and fall in love. As society splinters around them, the couple’s struggle to survive … END_OF_DOCUMENT_TOKEN_TO_BE_REPLACED