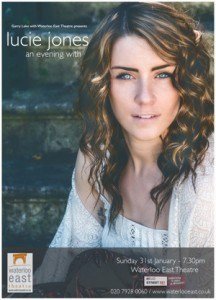 The musical theatre actress and former X Factor finalist will be appearing at the Waterloo East Theatre on Sunday 31st January 2016 to perform her one-night-only cabaret, An Evening With Lucie Jones. She will also be joined by some special guest artists, to be announced shortly.

Welsh actress Lucie Jones first rose to fame as a finalist in the 2009 series of The X Factor. She subsequently appeared with the other finalists in The X Factor Live tour the following year, playing to sold-out arenas around the UK.

She made her professional stage debut in the West End production of Les Miserables at the Queen’s Theatre, playing the principal role of Cosette. She also took part in the 25th anniversary concert of Les Miserables at the 02 Arena. Her other stage credits include: Kelly Byrne in The Prodigals (Edinburgh Festival), Meatloaf in We Will Rock You (International Tour), and originating the role of Victoria in the world premiere of American Psycho the Musical (Almeida Theatre).

She was most recently seen starring in the female lead role of Molly Jenson in the Asia Tour of Ghost the Musical. Her television credits include: Gemma in The Sarah Jane Adventures (BBC) and Melody Carver in Midsomer Murders (ITV).

Ahead of her London cabaret, Lucie Jones will be returning home this Christmas to perform a special Christmas concert, Lucie Jones – All grown up – Christmas Special, at the Acapela Studio, Cardiff on Saturday 19th December 2015. Looking back on her musical theatre journey so far, she will be joined by her local friends and some special guest performers, including students from the Louise Ryan Vocal School.