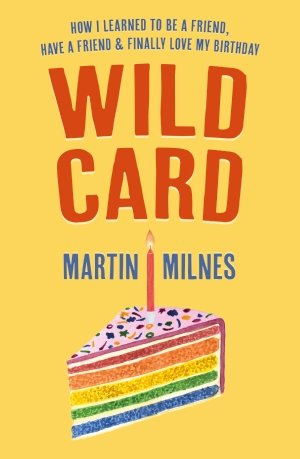 Actor, Writer and Theatre Director Martin Milnes has recorded an audiobook of his memoir, Wild Card: How I Learned To Be A Friend, Have A Friend & Finally Love My Birthday (published by Zuleika), which is now available from Audible.

The audiobook, which is narrated (and, occasionally, sung) by Martin Milnes, is produced by Guy Mott of Mushroom Studios. It follows the recent paperback publication of Wild Card, available from Amazon, major book retailers and independent bookshops.

The coming-of-age memoir has proved a morale-boosting hit in current times. Writer and broadcaster Gyles Brandreth said: “Need cheering up during lockdown? Read Wild Card! You’re crying with laughter one moment, tears of emotion the next. And the themes could not be more timely.”

Actor Alistair McGowan said: “Ways to keep happy during social distancing: read Martin Milnes’ Wild Card! It’s so diverting, highly original and helped me sail me through the first week of lockdown with kindness and inspiration and generosity.”

Martin Milnes was born in the wrong era or at least that’s how it seemed. As a child he wore jazz-shoes to his junior school disco, expecting eight-year-olds to Mambo like the dancers in West Side Story … but childhood and school days were no Broadway musical. Birthdays, stingingly empty, held a horrific reminder that he possessed no talent for friendship. Yet once Martin emerged on stage, the jeering turned to cheering; the lonely void was filled by Hollywood stars of yesteryear, worshipped from afar.

When Martin’s world shattered, the stars were there for him; and this time in person. The last surviving veterans of a glamorous era extended their guiding hands. Centenarian swimming partners, D-Day hero drinking chums, and propositions from naughty nonagenarians became every-day normality and the wisdom, understanding and truths which they passed on completely transformed Martin’s life, outlook and spirit. At last, with their help, the Wild Card learned how to be a friend and realised what a birthday truly represents. Not to mention, along the way, coming to terms with something which perhaps he should have recognised long ago…

Martin said: “I hope that Wild Card’s audiobook can help its universal themes reach an even wider audience. Since the paperback publication I’ve been moved to hear from readers of all generations who’ve said that they truly identify with the book’s key messages. I would love for Wild Card to speak, and provide hope, for everyone who’s felt as if they’ve never belonged; or needed time to discover their sexuality and accept themselves.”

Scotty Armstrong, a reader who discovered Wild Card via social media, confirmed the book to be cathartic: “I cannot tell you how much of your story rings true to me. Though different journeys and ways of dealing with it, the underlying hurt and struggle is the same…Only moving into 2020 did I tell myself that I would be 100% my true self and those who wanted me would stick around. Your book is helping cement that idea even more.”

New dates are announced today for the return of Agatha Christie’s Witness for the Prosecution at London County Hall on the Southbank. As the … END_OF_DOCUMENT_TOKEN_TO_BE_REPLACED

5North and Ellie Keel Productions’ Written on the Waves, a series of world premiere audio plays – the penultimate play, and first for a family … END_OF_DOCUMENT_TOKEN_TO_BE_REPLACED

Sonia Friedman Productions announces the dates for the RE:EMERGE season as priority booking opens on 15 April at 10.30am, with public booking opening … END_OF_DOCUMENT_TOKEN_TO_BE_REPLACED