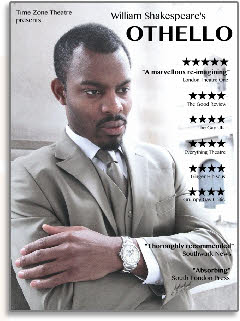 After an acclaimed 4-weeks-run at the Rose Playhouse, Bankside in February, Time Zone Theatre presents their contemporary adaptation of William Shakespeare’s Othello for a strictly limited run at Waterloo East Theatre.

Director Pamela Schermann transfers the action to the cityscape of modern London. In the cut throat financial world, we dive into an abyss of power and intrigue, riddled with suspicion and jealousy. Beneath the surface of this civilised and polite environment we encounter brutality and callousness.

“In times like these, competition is high. The cost of living in London raises massively year on year, and we are pushed to our limits”, says Schermann. “The question I want to ask with this production is: How much can and should we sacrifice to achieve our career goals? What if in the end there is nothing left worth fighting for?”

The stylish, fast-paced re-imagining of Shakespeare’s tragedy is set in the meeting room of the company’s office. Everyone is under constant surveillance, private and business lives entwine, workers are caught in a bubble without privacy or time off outside the Corporation. There’s always someone watching you, analysing your every move and waiting for an opportunity to stab you in your back.

★★★★★ “A marvellous re-imagining” (London Theatre One)
★★★★ “Concise, fast-paced and powerful” (The Gay UK)
★★★★ “Excellent” (Everything Theatre)
★★★★ “Creative and intelligent” (Ginger Hibiscus)
★★★★ “stunning visual moments…unique and arresting” (Grumpy Gay Critic)
★★★★ “James Barnes’ Othello is instantly likeable, open and conciliatory, carrying himself with an assured ease that rapidly disintegrates into agitation as he descends into all consuming jealousy.“ (The Good Review)