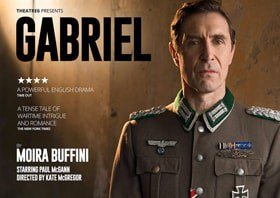 Theatre6 is delighted to announce the UK Tour of Gabriel, which opens in London at Richmond Theatre on Tuesday 28 March 2017, with a national press night on Friday 31 March 2017.

Starring Paul McGann (Withnail and I, Doctor Who and The Monocled Mutineer) and written by Moira Buffini (Handbagged, Wonder.land), this electric drama is directed by award-winning Kate McGregor and produced by Theatre6, co-producers of the award-winning, West End smash hit The Scottsboro Boys.

The story of Gabriel is based in 1943 Nazi-occupied Guernsey. Widow and mother Jeanne do whatever it takes to keep her adolescent daughter Estelle and daughter-in- law Lily safe on an island filled with danger and fear. Her toughest test arrives in the form of the terrifying Commander Von Pfunz, whose romantic advances may be the only way to keep her family alive. But tensions intensify when a mysterious young man is washed ashore with no memory of who he is. Fluent in German and English, is he an RAF pilot, an SS interrogator, a local boy with amnesia or a saviour sent from heaven? The stakes are high and getting it wrong means certain death.

Paul McGann, who established his name in the iconic cult film Withnail and I, returns to the stage for his first UK Tour. As well as numerous TV and film credits, including the TV series Hornblower, Luther and the film Alien3, Paul’s theatre credits include Helen at Shakespeare’s Globe in London, Butley in London’s West End and Mourning Becomes Electra at the National Theatre. Paul will play the role of Von Pfunz.

Sarah Schoenbeck will be playing Lily. Sarah’s theatre credits include The Breadwinner and The Man Who Pays the Piper (Orange Tree Theatre) and Sam Wanamaker Festival (Shakespeare’s Globe). Sarah’s television credits include Doctors (BBC) and the regular role of Lizzie Baker in 4 O’Clock Club (CBBC).

Venice van Someren will be playing the role of Estelle. Venice recently graduated from drama school. Since graduating, theatre credits include Thérèse Raquin (Southwark Playhouse) and Jodie in Can’t Stand Up for Falling Down (Theatre N16). This is Venice’s debut UK Tour.

After sell-out runs at Hope Mill Theatre, Manchester, and The Park Theatre, London, in 2022, Maureen Lipman returns to the West End with a performance … END_OF_DOCUMENT_TOKEN_TO_BE_REPLACED

THE PHANTOM OF THE OPERA at Her Majesty’s Theatre today announces Jon Robyns as ‘The Phantom’ from Monday 3 April 2023, Holly-Anne Hull as ‘Christine … END_OF_DOCUMENT_TOKEN_TO_BE_REPLACED

2023 marks the 50th Anniversary of the legendary smash hit musical The Rocky Horror Show, as it continues to play a newly extended tour through 2023 … END_OF_DOCUMENT_TOKEN_TO_BE_REPLACED