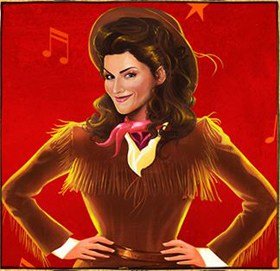 Sophia’s many West End credits include playing Epinine and Fantine in Les Miserables, Sophie in Mamma Mia!, Chloe in Never Forget and Marcy in The Witches of Eastwick. She most recently played Grizabella in the national tour of Cats.

Jamie Wilson said today “The tour of Calamity Jane has been more successful than any of us could have imagined with amazing audiences and great critical acclaim. To this end, the tour has continually extended resulting in new people joining the cast. We are thrilled that the wonderful Sophia will be playing Katie Brown from 26 May until the end of the tour in August”

Calamity Jane can outrun and outshoot any man in Deadwood. Hard, boastful and desperate to impress, she travels to Chicago to recruit a star, Adelaide Adams, for the Deadwood Stage. But things don’t go too smoothly for Calamity, as everyone in town favours the new girl and she struggles to keep her jealousy and pride in check. It takes her long-standing enemy Wild Bill Hickok to make her see sense, and realise her Secret Love…

Calamity Jane has an Oscar nominated score that includes The Black Hills of Dakota, The Deadwood Stage (Whip-Crack-Away), Just Blew in from the Windy City and the award-winning song Secret Love.

“CALAMITY JANE” is adapted for the stage by Charles K. Freeman and has music by Sammy Fain with lyrics by Paul Francis Webster.