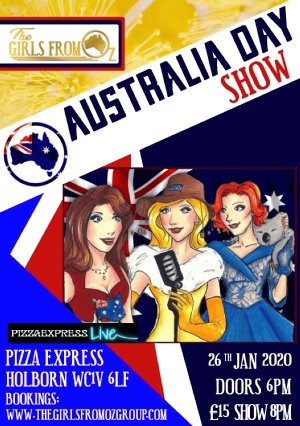 The Girls From Oz Australia Day Show!
They come from the Land Down Under – where women glow…

These ladies might be from the land of Oz but they are certainly starting to make a home for themselves in London as they prepare for their 5th Australia Day Show in the U.K.

Packed full of popular songs by Australian artists such as Kylie, Men at Work, Gotye, AC/DC and Peter Allen, The Girls From Oz reflect their very eclectic tastes in their own inimitable reimagining of these famous works. Originally an act with a vintage jazz twist, The Girls From Oz have allowed their shows to evolve to include folk, pop and rock style arrangements. Creator and performer Kara Lane says, “The name of our group – The Girls From Oz – is, of course, stolen, unashamedly from The Boy From Oz himself, Peter Allen, who is another Australian who left his beloved home country in search of a career in this business we call Show. Much like Peter Allen, I was not an average kid from outback Australia. While other teenagers in my home town were listening to Metallica and AC/DC, I grew up watching all the old Hollywood Musicals and loved cabaret acts such as The Fabulous Singlettes. This show definitely has elements of these influences throughout, as well as some more recent inspirations such as Postmodern Jukebox and Fascinating Aida.”

The girls, who are made up of West End and international performers Kara Lane (Mary Poppins, Rocky Horror Show), Jessica Condon (Kinky Boots, Priscilla Queen of the Desert) and Sally White (Jesus Christ Superstar), will be performing with their ‘Beaut Band’, bringing sophisticated arrangements (but plenty of down-to-Earth Aussie attitude) to these well known Aussie tunes.

With glamorous stylings, slick choreography and a bit of instrumental multitasking, these girls are out to prove that Australia isn’t just about beer, BBQs and beaches (although there are still plenty of those as well) and will provide an entertaining, spirit lifting and memorable evening for all.

‘As feisty a female trio as you’ll see on stage’
⭐️⭐️⭐️⭐️ MusicTheatreReview.com

‘A great performance all around, the night is filled with gorgeous tunes and a lot of laughs’
⭐️⭐️⭐️⭐️ West End Wilma

‘It’s a clichéd saying these days, but this is a vocal harmony group that could read the phone book (do they still exist?) and make it sound beautiful. An uplifting night out.’
⭐️⭐️⭐️⭐️ LondonTheatre1.com

From Kara Lane,
As you know, our home country has been in crisis trying to fight the devastating bush fires since last year. I was able to spend Christmas at home with my family in Australia for the first time in 19 years and was heartbroken by what I witnessed. Myself, along with other members of The Girls From Oz team, have seen family evacuated from their homes. Mine have been lucky so far but the scale of the disaster is effecting each and every Aussie around the world on a personal level.

As a result, The Girls From Oz have decided to not only offer free performances to the many fundraising events that are happening around London for this cause, but we will also be collecting donations at our Australia Day Show. The money will be going towards WIRES Wildlife Rescue and the Australian Red Cross.

We would appreciate your help in spreading the news about our show so we can raise as much money as possible for those whose lives have been changed forever by these events.