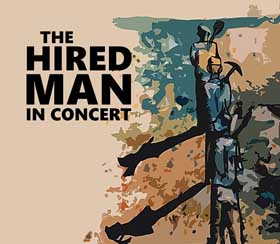 The concert will feature a cast of seasoned west end performers, and is to be narrated by Lord Melvyn Bragg himself, upon whose novel the musical was based. Bragg is perhaps best known to London audiences as the face of The Southbank Show for over three decades on BBC and ITV.

Set in the agricultural and industrial heartlands of Cumbria at the turn of the 20th century, The Hired Man tells the tale of John and Emily Tallentire as they go from two young lovers setting off in married life together to parents struggling to eke out an existence for their family as war looms across the continent. As the 100th anniversary of the first world war is commemorated and with communities in industrial towns across the country struggling to hold onto their way of life, this powerful tale of labour and love is more poignant now than ever.

The ensemble and live orchestra bringing this timeless score to life will be under the baton of conductor Andrew Linnie (The Commitments). The production will also feature evocative projections by designer Barret Hodgson and staging by Samuel Hopkins.

The original West End production in 1984 earned four Olivier nominations, and was proclaimed ‘Best New Musical’ by the Ivor Novello awards, The Guardian, The Stage and Time Out.

Full casting is soon to be announced.

Tickets are now on sale through Cadogan Hall’s Box Office on 020 7730 4500, or at www.cadoganhall.com.
Twitter @hiredmanconcert

'Look anyone will tell you, I’m a pretty straight sort of guy.' Tony Blair A reckless reappraisal of the life of former Ugly Rumours front man and … END_OF_DOCUMENT_TOKEN_TO_BE_REPLACED

Michael Harrison and the Really Useful Group are thrilled to announce that The Wizard of Oz, the musical based on the iconic story by L. Frank Baum, … END_OF_DOCUMENT_TOKEN_TO_BE_REPLACED

Following major demand for tickets, the Queen of comedy Dawn French has announced a host of new UK tour dates for her critically acclaimed live … END_OF_DOCUMENT_TOKEN_TO_BE_REPLACED