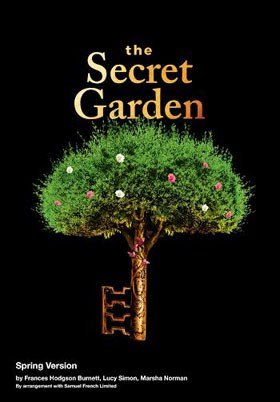 The Tony award-winning musical The Secret Garden, based on the 1911 novel by Frances Hodgson Burnett with script and lyrics by Pulitzer prize and Tony award-winner Marsha Norman and music by Grammy award-winner Lucy Simon, is coming back to the West End for a summer season.

The Secret Garden, directed by Rupert Hands, will run for 6 weeks at the Ambassadors Theatre from Wednesday 27th July to Wednesday 31st August 2016.

This specially “Spring” version of the show has been adapted to 75 minutes by its creators to be performed by young people. The Secret Garden is from the same production team as Annie Jr, which smashed box office records last summer at the Arts Theatre, at the same time giving 350 youngsters the chance to act for the first time in the West End.

More than 2,000 children have auditioned for The Secret Garden and 300 youngsters will be cast in the show.

Producer Matthew Chandler of P2P Productions said: “This is the European premiere of a new version of The Secret Garden, specially adapted to be performed with just 4 adult actors and 20 children. We have 21 teams child actors who will perform in rotation throughout the season. of It is a fantastic opportunity for all the youngsters involved.”

Orphaned while living in India, 10 year-old Mary Lennox returns to Yorkshire, England to live with her embittered, reclusive uncle Archibald, whom she has never met. There, the ill-tempered and lonely Mary meets Martha, a chambermaid, who tells her of a secret garden which belonged to her aunt Lily before she died. Mary’s search for the garden introduces her to a slew of other characters including Dickon (Martha’s brother), Ben (the head gardener), Neville (her other uncle), and a spirited robin that seems to be trying to talk to her. This compelling tale of forgiveness and hope reveals that even the cruelest of environments can blossom with new life.

The Secret Garden is presented by special arrangement with Samuel French, Inc.

Director Rupert Hands said: “I’m very much looking forward to working on this beautiful musical with such an exciting company of young actors. Giving young people the opportunity to work on great shows in great spaces is vital for the future of theatre.”

JAMIE NEALE (Choreographer)
Jamie choreographed It Is This?! at Sadlers Wells, choreographed for recording artist “R” on their track – Change, created twqo pieces for Design for Dance at the Central St Martin Art & Design, a collaboration with designers Saul Sebastien Aiden, Isakoolkid and Paloma-Jacob Duvernett, choreographed for singer/artist Madara Vilson at the Hippodrome Matcham Theatre, assisted Rachel-Birch Lawson in Dark Tower with director/writer Conor Mitchell for Youth Music Theatre and assisted Sarah Dowling at the U.Dance festival in Nottingham & Plymouth, He is associate choreographer on Snow Queen tour. Jamie has recently been given the opportunity to make his stamp on the world of TV, having secured a choreographer position on So you think you can Dance in Portugal and has worked with Mika and Will Young on their latest music tracks.

RICHARD BAKER (Musical Director)
Richard has been working as a Musical Director since 2005 and is also a composer, improviser and repetiteur. He is one of the MDs of Mischief Theatre, composing for the Olivier Award-nominated Peter Pan Goes Wrong at the Apollo Theatre and playing for Lights! Camera! Improvise! at the Duchess Theatre. Richard recently worked on Our House and Stephen Sondheim’s Road Show (Union Theatre) and Princess Ida (Finborough). He also worked with Act Now! last year, as MD of Loserville at the Rhoda McGaw Theatre.Other MD credits include NewsRevue at Canal Cafe Theatre, Finian’s Rainbow at Charing Cross Theatre, City of Angels at Hammersmith Lyric, Much Ado About Nothing at Riverside Studios, the 7th and 8th annual 50-Hour London Improvathon at the LOST Theatre, Comedians at Chelsea Theatre, Iolanthe at Buxton Opera House, and The Wandering Scholar at the King’s Head Theatre.

Cirque du Soleil has announced the London run for one of its most critically acclaimed touring show KURIOS— Cabinet of Curiosities. Opening on 13th … END_OF_DOCUMENT_TOKEN_TO_BE_REPLACED

Ambassador Theatre Group Productions are delighted to announce a UK and Ireland Tour of the pantomime MOTHER GOOSE. The first of its kind to tour the … END_OF_DOCUMENT_TOKEN_TO_BE_REPLACED

The National Theatre’s new musical Hex returns to the Olivier theatre for Christmas, after its original 2021 opening was delayed due to covid. The … END_OF_DOCUMENT_TOKEN_TO_BE_REPLACED