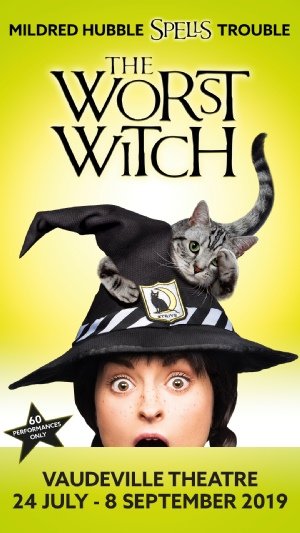 The Worst Witch will fly into the West End for 7 weeks only, over the summer holidays, from 24 July * to 8 September (*all tickets for the 24 July performance are just £20.00!) following its hugely successful premiere at Royal & Derngate and hit UK tour. This new story, adapted for the stage from Jill Murphy’s original books by Emma Reeves (who won a Royal Television Society Award for Best Children’s TV Programme and 2017 British Screenwriters Award for Best Children’s Programme for the televised version of The Worst Witch) was launched last November as Royal & Derngate’s Made in Northampton 2018 Christmas show.

The Worst Witch is the story of an ordinary girl who finds herself in an extraordinary place: a school for witches.

Accident-prone Mildred Hubble and her fellow pupils leave a trail of mayhem behind them as they find themselves at the centre of a battle that’s being fought for their future.

Jill Murphy says: “My first trip to the theatre aged four, opened up a magical world – so real to me, that I had to be restrained from climbing onstage to help the children in peril! My mum was quite cross with me, but I never wanted the show to end and sang the songs loudly all the way home on the bus. Imagine how proud I feel, all these years later, seeing my own Mildred Hubble on stage with all the characters from Miss Cackle’s Academy. I still feel thrilled to bits when I go to the theatre and The Worst Witch is a magical production.”

Emma Reeves added: “We’ve created a brand new story as well as revisiting moments from the books. Jealous Ethel Hallow is out to spoil Mildred’s fun, and Miss Hardbroom is opposed to all fun in general. But, without giving too much away, Mildred faces a greater danger than she ever imagined as an old enemy returns, with a plan for revenge that could threaten not just the Academy, but the whole world…”

Theresa Heskins says: “We’ve seen the start of a rebalancing of power within our society and it feels like an important time to be creating a play about young women who are learning, collectively and individually, to use their power; and the danger if they decide to use it not for good but for ill.”

Jill Murphy’s The Worst Witch stories have sold more than five million copies and been made into films and TV series by HBO, ITV and CBBC. There are now eight Worst Witch titles. The Worst Witch was made into a television series for ITV in the early 1990s and there is currently a major television series with CBBC. Jill is also well known for her picture books. She was commended for the 1980 Kate Greenaway Medal for Peace At Last. Five Minute’s Peace, the first in her series about the Large Family (of elephants), won the 1987 Parents Magazine Best Books for Babies Award, as well as being shortlisted for the 1986 Children’s Book Award. From the same series, All In One Piece was highly commended for the 1987 Kate Greenaway Award and shortlisted for the 1987 Children’s Book Award, and A Quiet Night In was short-listed for the Kate Greenaway Medal in 1994. The Last Noo-Noo won the 0-5 category of the 1995 Smarties Book Prize and in the same year was shortlisted for the English 4-11 Outstanding Children’s Book of the Year, going on to win the 1996 Sheffield Children’s Book Award. The Last Noo-Noo won the 1996 Gateshead Gold Award and in the same year was adapted as a play and performed at the Polka Theatre, London

Winner of the Royal Television Society Award for Best Children’s Television Programme, and of the 2017 British Screenwriters Award for Best Children’s Programme for the television adaptations of The Worst Witch, Emma Reeves’ screen writing credits include Eve, The Dumping Ground, Young Dracula and The Story of Tracy Beaker. Her stage work includes the Olivier Award-nominated and critically acclaimed adaptation of Hetty Feather (UK tour and West End).

Theresa Heskins’ past productions include The Snow Queen, which won the 2017 UK Theatre Award for Best Show for Children and Young People. Her wonderfully inventive and hugely popular production of Around the World in 80 Days was nominated for the same award, in both 2015 and 2017, and will tour to America in 2019.

Following on from the return of the critically-acclaimed, five-star production of Cyrano de Bergerac, The Jamie Lloyd Company brings Chekhov’s tale of … END_OF_DOCUMENT_TOKEN_TO_BE_REPLACED

THE PHANTOM OF THE OPERA at Her Majesty’s Theatre is delighted to announce that booking is extended to Saturday 4 March 2023, with a new performance … END_OF_DOCUMENT_TOKEN_TO_BE_REPLACED

Producer Runaway Entertainment is delighted to announce that the critically acclaimed, smash hit, supernatural thriller 2:22 - A Ghost Story will … END_OF_DOCUMENT_TOKEN_TO_BE_REPLACED