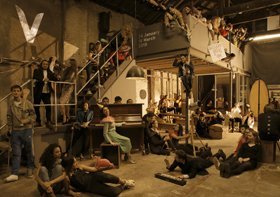 An advocate for social advancement in the arts, VAULT Festival will hold a round table on gender equality leading to the launch of its progression scheme for talented emerging female writers, Writers Gap. A New Writers Award, partnership with the Integrated Fringe Platform and massive HeForShe arts week celebration featuring Jamz Supernova and Etta Bond will all contribute to VAULT’s continued commitment to championing the best and most relevant contemporary theatre. With support from WeAreWaterloo, the programme scales immersive and site-specific theatre, comedy, dance, cabaret, film and much more. VAULT Festival returns from 24th January to 18th March 2018 with over 300 shows exploring a myriad of topical themes with over 53% of shows written or directed by women. Full programme and tickets available now via vaultfestival.com.

Writers Gap
With a high-reaching agenda to change the theatre industry from the inside out by altering its attitude towards female playwrights and their output, VAULT is announcing its Writers Gap scheme for talented emerging female writers to meet with producers and programmers from key London Theatres to explore and remove industry-wide barriers. The festival will hold a round table attended by writers from every echelon of the industry as well as senior representatives from almost all of the theatrical institutions named in Victoria Sadler’s damning blog on gender biased programming. Gathering to speak frankly about the challenges facing the drive for gender equality, the intention is to produce a roadmap for a long-term programme for emerging talent, with core funding from VAULT.

Continuing its commitment to female-led work, VAULT are proud to have programmed over 53% of shows written or directed by women. Paper. Scissors. Stone. from Fringe First winner Katie Bonna takes a sharp-edged peek into gender conditioning whilst Glitter Punch, from Some Riot Theatre, deals with student/teacher relationship boundaries, receiving nine 4 star reviews over its run in Edinburgh. Foreign Body is the critically acclaimed solo show about healing after sexual assault from Imogen Butler-Cole, whilst The Strongbox by Stephanie Jacob looks at contemporary domestic slavery. Further female-led work at VAULT includes Mission Abort, Ad Libido, Big Bad, ZINA, A Girl and a Gun, Double Infemnity, The Vagina Dialogues and Becoming Shades, the eight-week immersive circus spectacular which returns to VAULT 2018 with an all-female cast.

An examination of trauma and response to #metoo, VOID (14th Feb – 18th march) is a duo of immersive environments produced by RIFT, in association with Queen Mary University, VAULT Festival, People’s Palace, The Arts Council, We are Waterloo and The Arts and Humanities Research Council. Nestled in two freight containers in Waterloo are two stories written by Annie Jenkins and Joe Kerridge, offering a male and female experience. Born from the dialogues about sexual harassment, abuses of power and gender, the stories are told in fully responsive, immersive environments.

HeForShe Arts Week
Starting on International Women’s Day, 8th March, HeForShe Arts Week is celebrated globally for one week from the 8th – 15th March. As an official partner, VAULT Festival will join the United Nations Women campaign for gender equality and the empowerment of women across the globe, programming a series of events and round tables at the festival, with an aim to raise £10,000 for this vital initiative. The activity kicks off with a panel discussion entitled “What Actually Helps” (March 9th), followed by a legendary night of live music, DJ sets and dancing with HeForShe & ThisisWIRED Presents…. (March 9th) as part of the festival’s LATES programme. Co-curated by live music events collective, ThisisWIRED, the night’s line-up will feature top established and emerging female performing artists and DJs including BBC Radio 1Xtra’s Jamz Supernova, Etta Bond and REPREZENT’s Melle Brown with more names to be announced. The night will also include a series of talks, spoken word and poetry from the members of BOSSY with all profits going directly to the HeForShe campaign. The week’s activities will continue with a special programme from Small Things Theatre who present, A NIGHT OF SMALL THINGS (10th March) featuring a series of stand-ups, intimate musical sets, pint-sized sections of poetry and short gems of theatrical brilliance all providing their unique insight into how we shift culture, raise awareness and create real change for girls and women all over the world.

New Writers Award
Leading theatre publishers, Nick Hern Books is proud to support the first VAULT New Writers Award, an eight-week practical writing course for eight new and upcoming creatives keen to explore writing for the stage. Designed and developed by playwright Camilla Whitehill (Where Do Little Birds Go?, Mr Incredible) and producer Rosalyn Newbery in partnership with VAULT Festival, participants will receive mentoring and support to draft a 60-minute piece for stage, of which a 15-minute extract will be guest directed, cast, produced and performed over two finale showcase evenings to an audience made up of invited industry and the public on the 17th and 18th of March.

Plays From VAULT 3
Nick Hern Books will also partner with VAULT for the third year to release an anthology of plays selected from the best new writing at the festival. Plays from VAULT 3 will include Tumulus by Christopher Adam, Glitter Punch by Lucy Burke, Burkas and Bacon Butties by Shamia Chalabi and Sarah Henley and The Strongbox by Stephanie Jacob. Published on 26 January, to coincide with the beginning of the festival, the anthology will be on sale at the venue, online and in major bookshops.

Accessibility and Integrated Arts
VAULT Festival will this year partner with the iF Platform (Integrated Fringe) to showcase the work of companies and artists producing work with disabled and non-disabled artists with a scratch night hosted by Yolanda Mercy. Meanwhile, MIA: Daughter’s of Fortune, from Mind the Gap, tackles the taboo subject of learning disability and parenthood with silliness, stories and statistics. Further integrated work includes the playfully devised Follow Suit from Silent Faces and Georgia Morrell’s Eyecon with more to follow.

VAULT Festival’s Directors comment: “We are committed to creating a festival of artists and audiences that truthfully represents London and our society. We are committed to holding that space open for others to share it and use it to get their stories and voices heard. Diversity is not about meeting targets and ticking boxes; it’s an ongoing commitment to the present and the future to continue to effect positive change in our society and industry.”

Tickets and the full programme can be found at: www.vaultfestival.com

Sonia Friedman Productions has announced that Ruth Wilson will star in Ivo van Hove’s adaptation of Jean Cocteau’s The Human Voice, which he also … END_OF_DOCUMENT_TOKEN_TO_BE_REPLACED

The award-winning smash-hit production of Girl From The North Country, written and directed by celebrated playwright Conor McPherson (The Weir, The … END_OF_DOCUMENT_TOKEN_TO_BE_REPLACED

John Barrowman is back on tour with his new show ‘I am What I am’ The tour launches on Saturday 30 April, 2022 at Southend‘s Cliff’s Pavilion and … END_OF_DOCUMENT_TOKEN_TO_BE_REPLACED

Producer Karl Sydow has announced the West End return of a dazzlingly renewed version of Dirty Dancing - The Classic Story On Stage, following a … END_OF_DOCUMENT_TOKEN_TO_BE_REPLACED