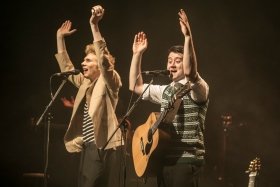 The Art of Paul and Funky Simon is how I responded to a fascinating press preview yesterday afternoon at the Lyric for the forthcoming one week run of the Simon and Garfunkel story at the Vaudeville Theatre on the Strand commencing 12th November. Performed by two wonderfully talented actors, singers, musicians: Sam O’Hanlon and Charles Blyth. Sam on acoustic guitar has both the stage charisma and musical talent to bring Paul Simon vividly to life. His playing and singing voice captures that unique Paul Simon laid back but beguiling effect. Whereas Charles Blyth with his tall thin frame, gorgeous blond curls and Keatsian poetic radiance, not to mention his pitch-perfect singing, is the ultimate Art Garfunkel Doppelganger.

Throughout history there have been notable partnerships and double acts – Anthony & Cleopatra, Beaumont & Fletcher, Fortnum & Mason, Marks & Spencer, Marx & Engels, Rolls & Royce, Waite & Rose, Laurel & Hardy, Rodgers & Hammerstein, Morecambe & Wise, Chivers & Gilzean, Chas & Dave, Lennon & McCartney, – that in some special way create something that the individual on her own cannot match. So it is a real treat to have one of the great musical partnerships of all time – that between Paul Simon and Art Garfunkel – put on stage by two such talented and totally committed artists. I can say without hesitation that Sam and Charles have utterly immersed themselves in the lives of Simon and Garfunkel. They have been playing one-night stands all over the world for the past two years. Cigarettes and magazines! They know their stuff. Like an old-fashioned variety act, they have learnt their craft and perfected their act playing venues in all shapes and sizes. Now they have a chance to play in the West End for a whole week. They are a pair of young very talented artists. They are excellent performers. Their renditions of Homeward Bound, The Sound of Silence, Mrs Robinson, Cecilia and Bridge Over Troubled Water are superb, they sent tingling down my spine. I urge you to support two fine young home-grown talents – they hail respectively from Chichester and Norwich – as they launch what I’m convinced will be a very successful career in musical theatre.

The Simon & Garfunkel Story, the world’s biggest and most successful Simon & Garfunkel theatre show, is to get a week-long West End season at the Vaudeville Theatre – 8 performances from Monday 12th – Saturday 17th November, 2018 in London’s West End. Press night is Monday 12 November at 7.30pm.

A critically acclaimed concert-style show, The Simon & Garfunkel Story takes you through all the songs and stories that shaped them, chronicling their rise from their humble beginnings as 50s rock n roll duo Tom & Jerry to global superstardom, their dramatic break-up at the peak of their international success, solo careers and ending with a stunning recreation of their legendary 1981 New York Central Park reunion concert, attended by 500,000 fans.