Almost any other comic saying periodically that ‘this’ (whatever ‘this’ happens to be) is a joke deserves, to quote a comic (don’t ask me which one) from a previous Fringe, a high-five in the face with a chair. But when Alex MacKeith dispenses nutritional advice about drinking directly from the River Thames (it’s a great way, apparently, to achieve weight loss goals, and for free), pointing out ‘this’ is a joke is wholly and entirely justified. 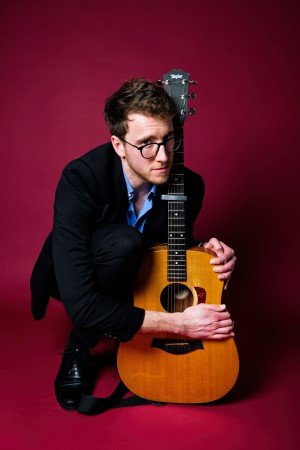 MacKeith’s songs, of which there are many, can be pithy and disarming, saying what he wants to say in a couple of lines, with no need for further embellishments. An example: “Why do only beautiful people play tennis? / Why do only ugly people come to my shows?” On the other hand, they can go on for quite a few verses – the opening number, about getting through the pandemic with his father (it didn’t take long for them to get on each other’s nerves) went on for several minutes.

We are, he thinks, bombarded with advertising. I liked his riposte at Lloyds Bank: if they are indeed “by your side” then why can’t he have a horse if he were to open an account with them? Vocally, MacKeith is very strong – he gets through more lyrics at a pace than would be reasonably expected without having to draw breath, and it’s always pleasing to see someone who genuinely enjoys doing their thing. The guitar skills are also excellent, and there’s a broad range of song styles to appreciate.

It takes considerable creativity to make people laugh about stories as ridiculous as an eel in the bath – and there’s something to be said about comedy being better than therapy, and not just because, as MacKeith points out, the former involves people paying him rather than him paying others. I know which room I’d rather be in. Absurd and astounding in equal measure.

In Thanks for Listening, Alex takes the likely fodder of observational comedy (a hot neighbour, a bank withdrawl, a date night) and spins it in wholly unexpected directions (taxidermy, horse ransom, electric eels) in an MTV-Unplugged style. Echoing the vibes of Greenwich village, he creates an intimate space in which he will use his brutally witty refrains to prove, once and for all, that acoustic guitar musical comedy is the purest of all art forms.

I have seen some outstanding acting recently at the intimate Finborough Theatre, and this new play is no exception. The highly talented cast quickly … END_OF_DOCUMENT_TOKEN_TO_BE_REPLACED

In the pandemic (remember that?) I worked in adult social care. My role was to help older people in their own homes with daily tasks - I’d cook meals, … END_OF_DOCUMENT_TOKEN_TO_BE_REPLACED

The world-famous Wilton’s Music Hall and the children’s classic The Wind in the Willows make perfect bedfellows. Piers Torday has written a version … END_OF_DOCUMENT_TOKEN_TO_BE_REPLACED

Some journalists get, as it were, a bad press, though some of them don’t help themselves with some of the things they write and do. This play doesn’t, … END_OF_DOCUMENT_TOKEN_TO_BE_REPLACED

Paul (Lewis Bruniges) and Freddie Metz (Oliver Yellop), who identify as cousins, are so desperate to get out of the German Democratic Republic, … END_OF_DOCUMENT_TOKEN_TO_BE_REPLACED