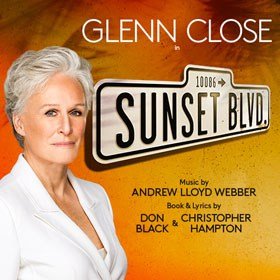 Many will be familiar with Billy Wilder’s 1950s film of Sunset Boulevard or, if not, at least heard of Christopher Hampton and Sir Andrew Lloyd Webber’s ‘As if we never said goodbye’ – possibly one of the best songs ever written for a musical. At a perilous time for the English National Opera, where their finances are at stake, a roaring musical with Tony Award-winning actress Glenn Close is, perhaps, the solution to reinvigorate the nation’s so-called opera house’s image. The Coliseum – one of the largest theatres in the West End with a capacity of 2,359 – needs to widen its audiences to fill its plentiful seats, and Sunset Boulevard could be the ticket to win many over.

The sold-out musical extravaganza of Sweeney Todd last year, featuring Britain’s favourite baritone Bryn Terfel and the brilliant Emma Thompson, proved how much of a guaranteed success musicals can be for the London Coliseum. Naturally it only makes sense to bring back its creative team and inventive director Lonny Price to run the show.

The production is a semi-stage performance, yet there are hardly any spatial or atmospheric limitations. James Noone’s cleverly crafted stage situates the stupendous ENO orchestra, of 48 musicians, behind the lead cast, playing an all-encompassing part of the stage – you are never too far away from the music!

Skeletal stairs across and above see the ensemble walk to and fro, in and out of Hollywood’s studios, while our lead diva Norma Desmond delights in her estate on the boulevard with opulent chandeliers adorn. Nostalgia also hits the audience with Hollywood spotlight beaming out onto the auditorium alongside authentic black and white film projected on to the stage.

Andrew Lloyd Webber’s glamorous and filmic score for Sunset Boulevard is made radiant by the wondrous ENO Orchestra and conductor Michael Reed who is renowned for conducting many works by Webber. His music comes at you in waves, almost instantly. The brooding and melodious overture floats you away to Hollywood, played with richness and finesse. It is the sound of a true blockbuster.

Glenn Close is ravishing. She reprises the role of Norma, making her debut in London which has won her several awards in Los Angeles and Broadway. Dressed in silks, furs and sophisticated couture, made exclusively for showbiz royalty and divas, she engages the audience’s eyes and converts them all, even those who don’t like musicals. She is a charismatic beaming star when she sings songs including ‘Surrender’, practically whispering before she gives vocal bravado to ‘As if we never said goodbye.’

Sunset Boulevard reveals the ruthlessness and cruelty of the Hollywood world after the shimmer of 1920s’ silent film. Influenced by many Hollywood legends who suffered a downfall 40 years later, including Mae Murray, Clara Bow, to Mary Pickford, Close personifies all of these desperate and reclusive divas; some were institutionalized, and became critically insane and suicidal.

However, entwined to this is another downfall shown through the writer Joe who Norma becomes infatuated with. Musical performer Michael Xavier is lean, muscular and dashing on stage, revealing an uncertain and cynical Joe in love with the ambitious scriptwriter Betty (Siobhan Dillion). Together Xavier and Dillion ignite romantic lyricism and sustain gorgeous high notes in ‘too much in love to care’, yet this is only momentarily as catastrophe and full on tragedy shortly follows.

The suffering also goes as far as Norma’s butler Max, formally a Hollywood director and her first husband. He adores her and sends hundreds of fake fan mail to retain her sanity. Theatre virtuoso and baritone Fred Johanson is marvellous as Max. See him make the audience tear their eyes to ‘the greatest star of all’.

The musically-charged ensemble also brings their A-game! Its producers Michael Grande and Michael Linnit leave a note in the programme stating, ‘our only concern as producers is what we will offer next year!’ and from viewing this moving, unique and ingenious production, you’ll soon understand why it may be a challenge for them to produce a show that will top Glenn Close.

In her mansion on Sunset Boulevard, faded, silent-screen goddess, Norma Desmond, lives in a fantasy world. Impoverished screen writer, Joe Gillis, on the run from debt collectors, stumbles into her reclusive world. Persuaded to work on Norma’s ‘masterpiece’, a film script that she believes will put her back in front of the cameras, he is seduced by her and her luxurious life-style. Joe becomes entrapped in a claustrophobic world until his love for another woman leads him to try and break free with dramatic consequences.

With the lush melodies of this much-loved score (including Sunset Boulevard, With One Look and The Perfect Year) performed by ENO’s acclaimed orchestra, this semi-staged production, with book & lyrics by Don Black & Christopher Hampton, promises to be a spectacular evening.

Glenn Close is joined by a company including Michael Xavier as Joe Gillis, Siobhan Dillon as Betty Shaefer and Fred Johanson as Max Von Mayerling. Lonny Price (Sweeney Todd: The Demon Barber of Fleet Street) returns to the London Coliseum to direct the strictly limited run of 43 performances.

This isn’t the first production to go down the road of referencing a one-star review of their show (from a different publication, I hasten to add). … END_OF_DOCUMENT_TOKEN_TO_BE_REPLACED

Two sisters reunite after the death of their mother, and secrets pour forth. Robert Holman’s new play gently exhibits talented classical acting in a … END_OF_DOCUMENT_TOKEN_TO_BE_REPLACED

Everyone’s vexed in this show, though some have clearer reasons to be than others. Mrs Driscoll (Tameka Mortimer) is struggling with a home life that … END_OF_DOCUMENT_TOKEN_TO_BE_REPLACED

The penultimate production of the 2021 Tête à Tête Opera Festival, based at London’s Cockpit Theatre and showcasing contemporary and avant-garde new … END_OF_DOCUMENT_TOKEN_TO_BE_REPLACED

Relatively Speaking premiered in 1967 and is the sort of show that is, by contemporary standards, very much of its time, and not just because of … END_OF_DOCUMENT_TOKEN_TO_BE_REPLACED