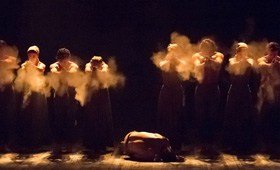 I was lucky enough to see Lest We Forget just under eighteen months ago when it first premiered at The Barbican. Back then I left the theatre moved by the power and poignancy of these brave new works. So it was a joy to return months later with the works still sitting vividly in my mind to see how they have developed.

Liam Scarlett’s No Man’s Land is an emotive and sensual story of absence. The piece begins with the women’s silent screams at the departure of their partners, as they each wrap their arms up the torso of their man, representative of the straps of their backpacks as they prepare to trudge off to war. We see the women begin work in the factories and the fatigue that they soon endure. The piece then moves on to focus on three classical pas de deux, with each couple having their own motifs and subtle movements that aid the storytelling. Scarlett’s imagery and staging come together to give a bittersweet portrayal that is both moving and absorbing. The superstar of this piece remains Alina Cojocaru, partnered on this occasion by James Forbat, she gives an emotive portrayal of grief when her partner does not return from the front line as the other women rush to embrace their returning heroes. What follows is a pas de deux of heart-wrenching absence. Cojocaru’s stature and lightness of touch adding to her vulnerability and despair. 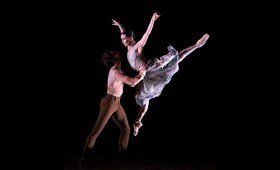 Second Breath, whilst still a strong piece of work from Russell Maliphant, when sandwiched between two such vivid and affecting choreographies it becomes a little forgettable. It ticks all the boxes with stylistic, mechanical movements (seen in Dust) and a melancholy pas de deux (seen in No Man’s Land) but neither are as memorable as those seen in the other two pieces leaving it hanging between to the two talking points of the evening. The set is stark and the lighting dingy, leaving the audience to do more of the work in piecing together this more abstract choreography.

And then we came to Dust. A piece so powerful it leaves its audience rigid with tension and breathless in anticipation. Akram Khan is daring in the rawness he portrays from the moment we see the contorted male body centre stage, jerking with tension, about to boil over. Dust is an example of a piece when all aspects of a concept come together in staging, lighting, music, performance and storytelling. The rippling movements of the ensemble as they all move as one unified body is hard to forget before the women emerge to perform a series of athletic, mechanical movements as they fulfilled the their roles in the factories. In contrast to Scarlett’s piece the movements are big and unapologetic, these are strong women, intensely focused and determined. Artistic Director, Tamara Rojo and James Streeter perform the final heart-stopping pas de deux. They throw their bodies into a series of awkward and uncomfortable lifts and jumps representative of the struggles to rebuild their relationship against the backdrop of war. At times it’s a difficult watch but you have to admire Khan’s talent for getting something so ambitious so right. I’ve rarely seen an audience so captivated.

It’s the kind of piece you watch with your eyes as wide open as possible because you want to absorb every tiny moment of brilliance. The evening ended with a standing ovation, the kind of reaction rarely received at a press night but never more so has it been so thoroughly appropriate.

After moving audiences and critics alike at its premiere in 2014, English National Ballet’s poignant reflection on the First World War, Lest We Forget returns to London this autumn at Sadler’s Wells from Tuesday 8 – Saturday 12 September.

Winner of this year’s South Bank Sky Arts Award for Dance, Lest We Forget features three works expressing the experiences of those who fought in the war and those who stayed behind, from three of the most sought-after British choreographers working today; Akram Khan, Russell Maliphant and Liam Scarlett.

Tamara Rojo, Artistic Director of English National Ballet said; “When Lest We Forget premiered last year, it was one of my proudest moments as Artistic Director so far. To create new works with three of today’s most celebrated choreographers was a great privilege. And needless to say, the reaction from critics and our audiences has been both humbling and incredibly moving. I couldn’t be happier that we are able to bring this programme back this year.”

The background stays largely the same throughout the performance, and appears to resemble the hairstyle of Elle Woods (Courtney Bowman). Regardless, … END_OF_DOCUMENT_TOKEN_TO_BE_REPLACED

Everyman is one of the earliest printed plays, originally written in Middle English and first performed around 1510. It is a morality play, popular … END_OF_DOCUMENT_TOKEN_TO_BE_REPLACED

After being closed for over two years due to covid, the Arcola Theatre has re-opened with Barney Norris’s love song to the people who raised him, We … END_OF_DOCUMENT_TOKEN_TO_BE_REPLACED

Now in its 15th year, La Clique have firmly established their place on the world burlesque circuit and this year’s London cast bring their infamous … END_OF_DOCUMENT_TOKEN_TO_BE_REPLACED