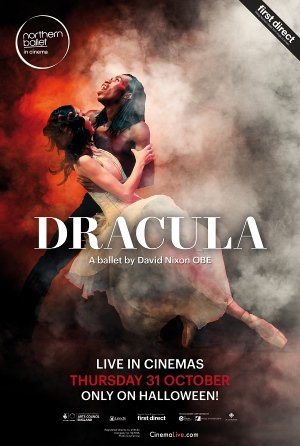 Performed by the UK’s Northern Ballet and broadcast live in cinemas across the country, Bram Stoker’s Dracula has come to life in a gothic, spectacular performance.

The show moves fast paced from scene to scene, leaving little time for contemplation, but that’s alright because every bit of the show is enthralling.

Northern Ballet’s adaptation of Bram Stoker’s dark, enthralling tale sees Count Dracula, the legendary vampire travel to England after becoming transfixed on a vision of Mina Murray, the innocent young fiancée of Jonathan Harker, one of the novel’s main protagonists. Unable to curb his murderous nature, Dracula terrorises the town as his yearning for the young woman grows. Mina realises she is powerless to resist Dracula’s lure… and a set of blood thirsty events are set in motion…

With an elaborately beautiful set design, lighting design and smoke effects, nothing feels out of place or lacking. Everything ties together well, with the sensual and gothic feel that belongs to a show like Dracula. The costumes are gothic and gorgeous, and the make up completes the dancers looks, from fangs to elaborate hair designs, especially with Dracula’s three brides, who look absolutely stunning and scary, danced by Rachael Gillespie, Sarah Chun and Minju Kang.

The dancers are phenomenal, with talent from all over the world. Javier Torres in the role of Dracula is spectacular and you can’t help but feel for him during his journey as his human side starts to emerge more and more.

Tiki Ito as ‘Old Dracula’, Kevin Poeung as ‘Renfield’ and Antoinette Brooks-Daw as ‘Lucy’ are three other performers who deserve a mention, whose performances were enticing to watch. They executed difficult moves with ease, and their character progression was intriguing to watch.

Before each act we’re given a synopsis of the plot, and it was easy to follow the narrative. The dancers faces were expressive and emotive, portraying their characters development elegantly.

The only thing that could make this performance better would be to have seen it live.