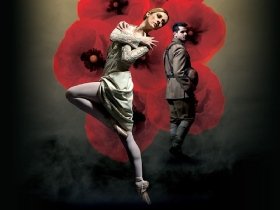 The double bill show opened with Vivaldi’s The Four Seasons, recomposed by Max Richter. It was not difficult to distinguish between the seasons. What would you choose from? The masterpiece that Vivaldi created, the excellent choreography by Jenna Lee, the stunning costumes by April Dalton or the very clever use of lighting by Andrew Ellis?

As the music, lighting and dance moved along at an enjoyable pace we were taken through the seasons, by five couples that performed with strong conviction.

With this being the centenary year of The Armistice, Remembrance in the second half absolutely blew me away. With excellent choreography from Wayne Eagling, who would have believed you could pull off a battlefield trench scene with dancing foot soldiers?

All seems well until Ashley receives his call-up papers to join the troops in World War One.

We share in the pain of his bride, along with her friends as their husbands are called to the trenches. The sorrow as she imagines he won’t be returning home and the joyous reunion when the war draws to an end and the troops return home.

Handel’s Ode for St Cecilia’s Day performed by The English Concert Orchestra, accompanied by The Erebus Ensemble put the icing on the cake for me.

New English Ballet Theatre presents its most ambitious season to date this autumn with Remembrance | The Four Seasons – a visual and musical feast of passion, hope and remembrance in a new double bill which opens at Theatre Severn, Shrewsbury on September 18th and tours till October 1st with London dates at the Peacock Theatre on September 27th, 28th, and 29th.

Remembrance is a brand new ballet created for the company by the world-renowned choreographer Wayne Eagling.