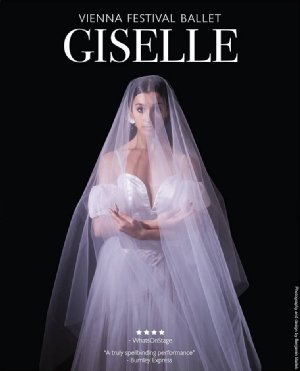 The audience that were fortunate to be present at The Vienna Festival Ballet Company’s opening night of their 2019 national tour were spellbound at The Theatre Royal Windsor, as the timeless love story Giselle unfolded before their eyes.

The story of Giselle takes place in a tiny village nestled in the romantic forests of the Rhineland. The forests are haunted by the Wilis, they are young maidens who love to dance, and have passed away far too young, from broken hearts, after being deceived by their lovers.

As the excellent musical score by Adolphe Adam, sends the most ear-pleasing sound around the auditorium Giselle dances with her lover Albrecht. On more than one occasion Hilarion who is besotted by Giselle’s beauty tries to warn her that he is deceiving her. Giselle’s love for Albrecht is so strong that she dismisses Hilarion.

Alas, Hilarion was telling the truth. Giselle seeing Albrecht in the arms of another woman is too much for her to bear and she dies of a broken heart.

Act Two takes place by the grave of Giselle. The spectacle of the Wilis dancing in the forest to summon Giselle from the grave to join them has got to be one of the most beautiful visions in live theatre that I have ever seen.

I don’t want to reveal how the love story ends. But I will say it is the most mystical, magical romantic ballet I have ever had the pleasure to see.

The ultimate romantic ballet, Giselle is a tale of innocence, love, betrayal and madness. With music by one of the 19th century’s best composers, Adolphe Adam, and choreography by the late Nicholas Beriosoff, VFB’s traditional staging of this 1841 masterpiece moves from the sunny optimism of Giselle’s idyllic village life to an ethereal world of mystery and menace. Giselle, a peasant girl, has fallen in love with Count Albrecht, who has told her he is a villager named Loys. Her discovery of his true identity has devastating consequences.

With its irresistible combination of a heart-breaking story and exquisite choreography, Giselle is the perfect way to discover classical ballet.