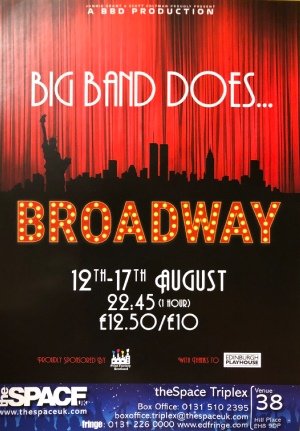 It was difficult to keep up with the twenty-eight strong team on stage in Big Band Does Broadway (eighteen musicians and ten singers and dancers). The show’s producers, Scott Coltman (also director) and Jonnie Grant (also musical director), together with choreographer Danielle Logan, have put together an hour-long extravaganza that squeezes in more tunes from more musicals than some musical theatre concerts manage in two and a half hours. To a certain extent, this is because they’ve taken extracts from various showtunes and spliced them together.

There are many hits to enjoy, but there are some lesser-known tunes thrown in as well. There are only two reservations for me, and one of them is nothing the production can do anything about! Firstly, with any show of this kind, there are always going to be certain songs from certain shows that are omitted from the line-up. Such is life. Secondly, with that many brass instruments going at full tilt, it was always going to be a challenge to get the sound balance between the band and the singers perfectly correct throughout. The odd lyric was lost here and there with all the horns, trumpets and saxophones blaring, but to be honest most of the audience probably knew most of the lyrics anyway.

This is very much a whistle-stop tour of Broadway shows – ‘Broadway’ being very much the operative word: the show thus closes with numbers from Broadway shows that have yet to open in the West End, namely ‘Let It Go’ from Frozen, and then ‘Something About This Night’ from Finding Neverland the Musical, which I must admit I hadn’t heard before seeing this concert, but it was a feelgood, enthusiastic number to round things off that even stopped a medley of songs from Hairspray that preceded it.

The songs do the talking in a production that hits the ground running and doesn’t stop pressing onward at full speed until every last one of the available sixty minutes in their allotted time slot has whizzed by faster than a late-running white van man. It’s difficult to pick out outstanding highlights when the whole thing was so damn good, but I liked the arrangement of a number of songs from Les Misérables – ‘Bring Him Home’, ‘Stars’, ‘I Dreamed A Dream’ and ‘On My Own’ were packaged together beautifully: this wasn’t the usual belt out of ‘One Day More’ that musical theatre concerts are usually subjected to.

It a wonderful thing to hear people stamp their own authority on musical standards liked ‘Don’t Rain on My Parade’ from Funny Girl or ‘Easy Street’ from Annie. There’s something here for musical theatre fans of every generation to enjoy, and every so often the band has the stage to itself. One of their arrangements fuses together the likes of Legally Blonde, The Producers and Hamilton, and when the performers are on stage, this is far from a stand and deliver concert – the choreography is tantalising and enthusiastic. It’s BBD Productions’ first Edinburgh Fringe, and they’ve arrived in style. A memorable and exuberant experience.

Some of musical theatre’s biggest hits and some lesser-known gems will be brought to life by an outstanding cast of singers and dancers from all over the UK. The whole ensemble being professionally trained from some of the best performing arts schools in the UK are supported through brand new arrangements performed by some of Scotland’s best big band musicians.

If you have ever wanted to hear what the opening bars of Wicked would sound like arranged for saxophones, trumpets, trombones and a rhythm section, or hear a Primary Times Choice award-winning performer sing Sunset Boulevard, or see fresh, new choreography paired with the legendary music of 42nd Street? Then you really ought not to miss this one-of-a-kind production, running for one week only this Festival Fringe!

Everyone’s vexed in this show, though some have clearer reasons to be than others. Mrs Driscoll (Tameka Mortimer) is struggling with a home life that … END_OF_DOCUMENT_TOKEN_TO_BE_REPLACED

The penultimate production of the 2021 Tête à Tête Opera Festival, based at London’s Cockpit Theatre and showcasing contemporary and avant-garde new … END_OF_DOCUMENT_TOKEN_TO_BE_REPLACED

Relatively Speaking premiered in 1967 and is the sort of show that is, by contemporary standards, very much of its time, and not just because of … END_OF_DOCUMENT_TOKEN_TO_BE_REPLACED

For those who don’t know, MARIO is the title character of the bestselling video game franchise of all time, which began in 1983. These days he is an … END_OF_DOCUMENT_TOKEN_TO_BE_REPLACED

Al (Cameron Corcoran) has managed to bring company home with him. His wife, Louise (Polly Waldron) didn’t get so much as a text message in advance of … END_OF_DOCUMENT_TOKEN_TO_BE_REPLACED