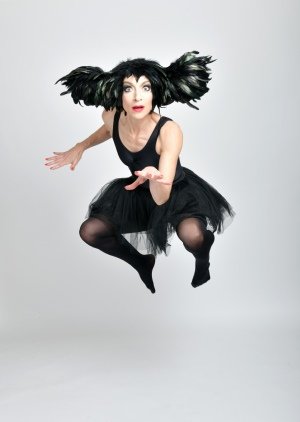 A show like An Evening Without Kate Bush needs to satisfy, as Sarah-Louise Young acknowledges, two groups, or camps, or categories of audience member: those who see the words ‘Kate Bush’ in the title of the show and therefore want to see what it’s all about, and those who are dragged along by Kate Bush’s fans / followers / ‘Fish People’ (if you know, you know) to see it, having been persuaded one way or the other, perhaps by the offer of a free drink at the bar, or the fact that it’s only an hour-long, so if it’s really awful then there’s still a good time to be had in a nearby pub afterwards.

I wasn’t alone in the audience at the performance I attended in not having seen Kate Bush perform live – such gigs are a rare occurrence. One audience member happily volunteered the information that she had attended Bush’s 2014 Hammersmith Apollo residency, having bought premium seats because her partner had concluded that attending a Kate Bush concert in London was akin to him bagging tickets for the FA Cup Final. The analogy doesn’t quite work: unfortunately for Kate Bush fans, her concerts are not annual events and are not televised. Either way, a tribute act (which is essentially what this is) is probably going to be the only in which many people will enjoy her music performed live, and that’s if you can bear the backing tracks in this production.

As ever in a single performer show that relies somewhat on the response of the audience, there’s that dreaded phrase ‘audience participation’ – don’t say I didn’t warn you. That said, nobody is ever asked to do anything remotely embarrassing, and there is something strangely pleasant about being in a room full of people singing, “Babooshka, babooshka, babooshka-ya-ya” or indeed “Heathcliff! It’s me! I’m Cathy, I’ve come home! I’m so cold, let me in-a your window!” as though this were a non-religious version of BBC Television’s Songs of Praise.

Young enjoys a good rapport with the audience (albeit an unassuming one), even amongst those of us who didn’t know every lyric to every song. Part of me thinks the production may have benefitted from a little more exposition – a hypothetical alien walking into a performance of this show is unlikely to come out of it knowing much more about Kate Bush than when it went in, aside from the sheer eclecticism of her back catalogue. Then again, if one hasn’t heard of Kate Bush, where has one been since the late Seventies? In any event, it’s not like there aren’t oodles of biographical information available online, and there is a need to keep the fanbase entertained, rather than having them sat there waiting patiently while details of her life that they already know about in detail are summarised.

But there is an expectation that people would, for instance, ‘remember’ the music video of ‘Don’t Give Up’, Bush’s 1986 duet with Peter Gabriel, apparently six minutes and twenty-nine seconds of the pair hugging continuously. It didn’t ring any bells with me. Rather than try to go through all of Bush’s hits, a few are carefully selected, and from what I could tell, the older tunes outnumbered the newer material. An enjoyable performance, presented in an engaging manner, An Evening Without Kate Bush is a positive reminder of how refreshing and invigorating the collective theatre experience can be.

The chaotic cabaret cult, AN EVENING WITHOUT KATE BUSH is here!

Enter Strange Phenomena, howl with The Hounds Of Love and dance on the moors with Wuthering Heights.

Kate’s not there, but you are.

From the makers of ‘Julie Madly Deeply’. But completely different.

Performer Sarah-Louise Young (Cabaret Whore, The Showstoppers, La Soiree) has teamed up with director Russell Lucas (Warped at VAULT Festival) to explore the music and mythology of one of the most influential voices in British music.

From releasing ‘Wuthering Heights’ at the age of 19 to selling out the Hammersmith Apollo nearly forty years later, Bush has always surprised and confounded her critics. Through it all her fans have stayed strong. Young invites you to celebrate her songs with this unique and mind-blowing show.