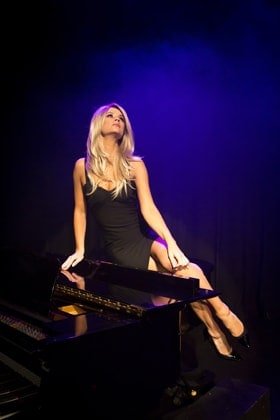 A happier, more enthusiastic Britney audience would be extremely hard to find as we stream into Andrew Lloyd Webber’s gorgeous The Other Palace Theatre in anticipation of our evening at Britney Spears: The Cabaret.

A solitary grand piano is set on stage underneath a tumbling waterfall chandelier; we settle into the intimately-packed cabaret seats, the majority of us clutching the night’s special offering, the Britney Fizz – pink prosecco. Britney’s back catalogue plays over the speakers, and we’re all grooving in our seats before the show has even begun. Our accompanist Mathew Frank, dapper in black tie, arranges himself at the piano and the first few chords of an imaginatively reworked ‘Circus’ ring out – the stunning Christie Whelan Browne seductively descends the auditorium stairs, and the show is under way.

From the second she takes the stage, Whelan Browne is just divine – she is a hilarious, witty and effervescent caricature, with an accurate Louisiana accent, and she has all the Britney mannerisms down to a T. Giggling her way through her opening dialogue about being good old Britney from the South, we’re quick to realise that we shouldn’t be fooled – this is very much a Britney Spears for the audience who have grown up with her through the years.

Britney’s wild stories and hilariously accurate vocal nuances all fit seamlessly into the story arc of the cabaret. We are taken on a ride from the nostalgic highs of ‘Baby One More Time,’ (reworked to make us really listen to the lyrics), ‘Womanizer’ (turned into an angry man rant), ‘Piece Of Me,’ (turned into an anecdotal monologue) ‘Toxic’ (sitting in the story so that it’s aimed at Justin Timberlake) and ‘Slave 4 U’ (performed with tap-dance shoes and a cane…!). We are then drawn right into the more emotional moments, such as when ‘Britney’ talks about her children, her conservatorship, her relationship breakdowns… and the fact that this woman has essentially been a music industry ‘product’ from her teenage years to the present day.

Dean Bryant wrote and directed the show and must be given real credit for his sharp imagination and insightful direction; the collaboration between him, Whelan Browne and Mathew Frank is sublime. Through the magically reworked music to the brilliant anecdotes (which are all entirely true to life), they take us on an uproarious, observant and at times really touching journey through Britney Spears’ extensive catalogue of extremely iconic and cleverly constructed pop songs. Whatever your opinion of Britney Spears is, as a cultural icon or a person, as a pop star she really can do no wrong when it comes to being a true mainstay of our generational music landscape, and the show totally makes her story come to life. Britney Spears: The Cabaret is an absolute must-see.

Britney Spears: The Cabaret arrives at The Other Palace this September after sell-out seasons in Australia.

Not so much a cabaret as a cry for help, star of Australian stage and screen, Christie Whelan Browne, reprises her critically acclaimed performance in this hilariously funny and strangely touching satirical look at the perils of fame.

Christie has wowed audiences in Company, Born Yesterday, The Producers, Xanadu as well as playing opposite Geoffrey Rush in A Funny Thing Happened On The Way To The Forum, The Importance Of Being Earnest and The Drowsy Chaperone.

‘Whelan Browne delivers with laser precision, switching in a nano-second from dumb broad to sweet innocent without you seeing it coming. Brilliant!’ The Australian