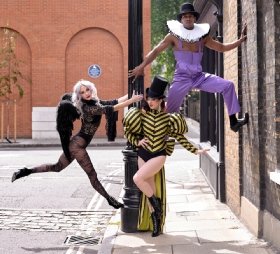 Circus shows are ten a penny these days You can barely walk the streets of London without running into another set of acrobats, jugglers and scary clowns vying with each other to get your attention and hard earned cash. Down on the South Bank, the Underbelly festival has had a few circus shows during this year’s run and now another has rolled into the Spiegeltent. So the big question is, what does Black Cat: Bohemia have to give it that additional wow factor and make it stand above everyone else?

Well, the first thing it has is a truly magnificent compere in the shape of Miss Frisky (Laura Corcoran). Frisky by name and frisky by nature, Miss F is the perfect hostess. She could be described as a female drag queen, the costume and mannerisms are so reminiscent of the best drag performers you will see. Frisky ‘bantz’ with the audience, somehow being drawn to other theatrical types and wealthy men, all of whom can’t help but respond to her winning personality and charm. Not only that but Laura has an extremely good singing voice, which really comes into its own in powerful performances of Kate Bush’s “Wow” and Springsteen’s “Because the Night” all sung to the backing of the live band under the direction of James Keay.

On the acrobatic side of things, there was a bit of a problem as performer Leon Fagbemi was injured on his tumbling introduction. This might have been a problem but in the true spirit of ‘the show must go on’, there was some fast rearranging of the running order by Director Sean Kempton and the team while Miss Frisky’s ‘Knaves’ (Nicolas Jelmoni and LJ Marles) – a sort of acrobatic Chuckle Brothers – kept the programme going with their rather fine hula hoop work. I have to admit that had I not seen Leon’s accident happen, I wouldn’t necessarily have known anything was up, so seamlessly did everything progress.

As you would expect, the performers were amazing in their respective fields. The stunningly beautiful Jo Moss really knows his way around a hoop and his Vitruvian Man segment really had the wow factor as did the fire performing skills of Missy Fatale (Hayley Harvey-Gomez) which had grace, beauty and a real touch of fear to keep the audience engrossed.

Overall, Black Cat: Bohemia was definitely one of the best circus shows I’ve seen for a long time. Despite the posters, there was no sign of any clowns – which was a real plus for me and my mild case of Coulrophobia – just a really great cabaret mixed with wonderful acrobatics. Obviously, given the circumstances, I didn’t get to see the full show but what I did see was fun and entertaining, and well worth a trip to the South Bank.

The Black Cat Cabaret has been captivating the city’s audiences with their dark and daring brand of cabaret entertainment for more than a decade. Black Cat: Bohemia is the company’s most ambitious show to date, and premières with the company’s first headline run at Underbelly Festival Southbank. Combining high skills acrobatic feats and spectacular ensemble work with comic turns and live music, the show’s 12-strong cast elevate cabaret and circus to new levels of jaw-dropping glamour. This is a thrilling theatrical experience not to be missed this ummer!

The show conjures up a smart, sexy and psychedelic vision of a circus troupe dedicated to the eternal Bohemian mission: to leave the world a more beautiful place through their art.

Echoing bohemias past from Montmartre to Weimar Berlin, from the Hotel Chelsea to the 80s Blitz Kids, their enclave of love and artistic obsession burns like a brightly colourful flame in the darkness. Yet all is not well in paradise. As the night unfolds, the company, led by their visionary emcee, begins to unravel. In the timeless spirit of cabaret, the show takes us on a journey from the sublime to the ridiculous and back. But one thing is clear – this party must go on!

Taking up a 6-week residency at Underbelly Festival Southbank’s glorious Paradiso Spiegeltent, Black Cat: Bohemia is the perfect place to celebrate the 250th Anniversary of the world’s first circus – where Philip Astley first created a rope ring just streets away in the marshland around Waterloo station. As the producer of the festival’s final headline show, The Black Cat Cabaret is flying the flag for London’s underground cabaret and circus scene amongst an array of international talent on offer throughout the program.