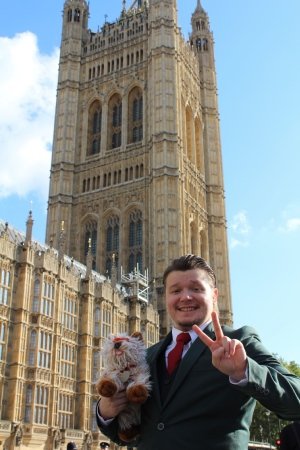 There came a point during Defective Inspector when I couldn’t help thinking that this would work well in a late evening slot at the Edinburgh Fringe. Laughing Mirror Theatre Company have done the Fringe before, of course – and your reviewer should know, having seen their production White Girls there. This is a markedly different show than White Girls, not least because this can hardly be construed as a portrayal of real events. It also achieves that relatively rare thing (these days, anyway) of having its writer and director playing the lead character rather successfully and convincingly.

Twenty-five supporting characters are played by Lisa (Anna Hodgson) and John (Daniel Hemsley) between them, each distinct by swift if deliberately chaotic costume changes and, more often than not, different accents. At the risk of taking a comedy play too seriously, the narrative supports having various manners of speaking, as Richard P Cooper (an energetic Harrison Cole) crosses the Atlantic from Blighty to the United States.

Such is the breakneck pace of this production that I suspect the exact reasons for Cooper’s venture to America were mentioned, but somehow, I missed it in all the laughs and giggles elicited by both punchlines and elements of physical theatre that permeated the performance. The cast do well to maintain the demanding briskness of the show to the very end. If it feels rushed, it also feels deliberately so, as though the production really is acknowledging the limitations of not having the twenty actors Cooper apparently asked for. It’s a hardworking cast, and though the script puts in plenty of ‘mishaps’, which calls to mind Mischief Theatre’s The Play That Goes Wrong, they’re equally adept at making the most of, for instance, an unplanned out of place prop.

Not every punchline lands well, even with this unassuming audience, at least partly because of Cooper’s sometimes outdated and occasionally bizarre views (which are not worth recalling and regurgitating here). There are moments that are a little too contrived, such as when a call for a blackout results in the house lights going up, but the regular breaches of the fourth wall add to the level of engagement with the show. Someone is apparently plotting to assassinate the local mayor, Mark Cross, and it falls to Cooper to find out who it is and foil their ambitions. Let’s just say that this isn’t called Defective Inspector for nothing.

I’m not sure whether the conflict resolution technique of pulling out a gun is indicative of American culture or merely indicative of the perception from of those of us looking in from the outside. Either way, it’s one of those one-act shows that manages to cram more action into an hour than some other plays contain in two and a half. Oh, and there’s a dog, Mr Fluffington – like many stage animals, he steals the show. A brief but barmy production, there are plenty of laughs to be had on this journey, provided you can keep up with it.

Defective Inspector is the latest whirlwind comedy from Laughing Mirror. An eccentric ex-Detective, Richard P. Cooper, attempts to stage one of his “legendary” exploits to the USA, with help from two hapless drama students. The cast of 3 just about manage to perform their way through a ridiculous series of adventures, involving three-legged dogs and assassination plots, while tensions run high between them and the show falls apart quicker than Richard’s failed novelist career.

The show that finds a sweet spot between Garth Marenghi’s Darkplace and The 39 Steps hits London after a sell-out debut at the Brighton Fringe this year.