Home » Reviews » The Show In Which Hopefully Nothing Happens 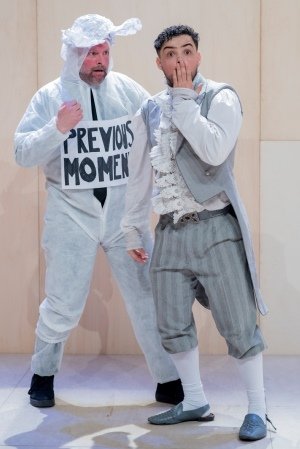 This is the show in which hopefully nothing happens but the happenings that do happen actually almost didn’t happen (self-fulfilling prophesy) because there happened to be a glitch in the staging preventing the mariotronic “happenings” (small independently moving plaster-of-Paris figurines for the uninitiated) from proceeding which obliged a cast (uh-huh) member to coax and cajole the said “happenings” to continue happening though this didn’t quite happen so the Stage Manager had to happen into the non-happening action and take back control (where have I heard that before?) so that the recalcitrant happenings could resume happening and happen across the stage to the neat little “happenings” exit that that had magically happened in a wall of the stage.

Have to say that said cast member (one of two) handled the gremlinisation of his show with great in-character aplomb – save for the sheer panic in his eyes as he signalled time-out to the tech bods. One would have to say that the delighted audience of mainly junior school children sporting their fetching pink hi-vis jackets probably thought it was all part of the show and it did not interrupt their enjoyment one jot – or mine, for that matter.

The show is genius. Based on the rather random idea that nothing should happen on stage in a play, panic-eyed cast member, the brilliant Deadpan Dick, AKA Nigel Barrett, dark-suited with a security badge on his top pocket,
attempts to prevent anything happening. He locks the door to the stage. He sets an alarm. He patrols. And he exudes the ominous air of a nightclub bouncer who won’t let anyone into the club who’s wearing jeans, trainers, tee-shirts or designer stubble – we’ve all met them. But when you have a slightly hang-doggy effete luvvie-type acTOR (I know – sorry luvvies) who wants to wheedle his way into the (non-happening) action then the stern eye and heavy-handed opprobrium melds into all kinds of emotional turmoil from curled-lip condescension to rabbit-in-the-headlights wide-eyed alarm (acted, not real, this time). It’s a wondrous performance by Barrett and I don’t think it’s too much of a spoiler to tell you that he ends up prowling the stage with a bright red coffee pot strapped to his bonce.

His desperately-seeking-action accomplice is played by Riad Richie who sports a vaguely seventeenth-century “actor’s costume”; I reckon Riad, as a fully paid-up action-hungry career Thesp must have had a field day when his director said “pick out a costume, Riad!” I wonder how many “actors’ costumes” Riad tried on. I can see him taking this one home and wearing it to parties. Richie is an excellent foil to Barrett and the pair are a great comic duo in the tradition of Laurel and Hardy, Morecambe and Wise and, er, Tom and Jerry. Yes, they’re just like Tom and Jerry in their mad, uber-inconsequential, chasings and strivings for happening/non-happening perfection and their engaging banteresque exchanges get the young audience members gleefully calling out with evermore insistent helpful suggestions and amused “look-behind-you” type warnings. This is great theatre for kids because it never talks down to them and allows them to make up their own minds of just how crazy the extraordinary situations are. They loved it.

The show was created by Jetse Batelaan, originally in Holland, and he also directs. To me, this a show straight out of the James Saunders playbook, indeed a worthy successor and tribute to the master of theatrical linguistics – cf. What Theatre Really Is – who is sadly no longer with us. Whether Batelaan is aware of Saunders’ work I don’t know but the clever exploration of ideas that are tested to breaking point coupled with the inspired probing of theatrical language marks this work out, like that of Saunders, as “experimental” theatre of the highest order which will involve and immerse young audiences. (Don’t be put off by the use of the word “experimental”).

When it’s a great show I normally say go see it! But – it’s a kids show – so find a bunch of kids and go see it with them!

Welcome to the most boring show in history: an actor who never gets to perform and a security guard who just hopes nothing will occur.

Originally created in the Netherlands by highly acclaimed, maverick theatre-makers Theater Artemis, The Show in Which Hopefully Nothing Happens is one of the most popular family shows performed in Europe. This incredibly surreal, deliciously funny, absurdist show has become part of the Dutch theatre canon and is now being recreated with a British cast and performed for the first time in the UK, in this co-production with the Unicorn Theatre.

Created and directed by Jetse Batelaan (winner of the prestigious Silver Lion Award for Theatre 2019 from the Theatre Biennale in Venice) and featuring UK performers Nigel Barrett and Riad L Richie, The Show in Which Hopefully Nothing Happens has been described as being about nothing and everything at the same time.

In a world where increasingly nothing seems to make sense, step inside, take a seat and realise you are not alone in this carefully crafted, absurdist masterpiece of hope, humour and failure.