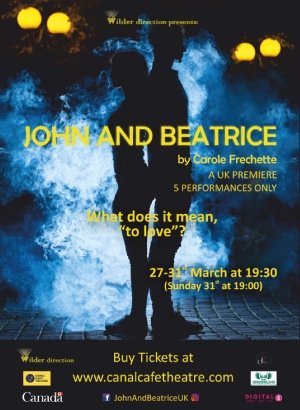 Having read the promotional material for Carole Frechette’s new play John and Beatrice I was really intrigued as it spoke to many of my favourite dramatic obsessions. A short one hour, two-hander about a man and a woman locked in a room with each other for fifty years. I looked forward to a Beckettesque existential, tragic comedy about the human condition and especially the perennial question: how do we get through the day? What do we do to pass the time? How do we maintain love for one person over a fifty-year life span? These are questions which Beckett, Pinter and Stoppard have explored and so I approached John and Beatrice with hopes that these questions might be given a new twist by a contemporary writer. I’m saddened to say that it doesn’t live up to its billing. Which is a great shame because it has so much going for it.

John and Beatrice is a two-hander set in a flat on the 33rd floor of an apartment block. Beatrice (Anita Adam Gabay) has advertised for a young man to interest, move and seduce her in return for a substantial reward. John (Aydan Wilder) responds to the ad. The play can be divided into two phases. The first phase lasting approximately 45 minutes, I found this the least convincing. Trying to be too clever by half, it struck me as a cross between the theatre of the absurd and a surrealist happening. In a misconceived parody of the torture scene from Reservoir Dogs, John ties Beatrice to a chair and tapes her mouth whilst holding a knife to her throat. This is neither scary or funny and just doesn’t work. Beatrice regularly falls asleep like the mouse in Alice in Wonderland and projections onto the back screen of the two of them running on the beach play on the clichés of young love but again they miss their target. Nobody in the audience laughed at any of this part of the play.

The last 15 minutes are a different matter. At last the play hits the spot and starts to engage the audience. After 45 minutes the audience finally laughed. The change comes when Beatrice admits that she has no money and that John can’t leave. She makes a spiders web around John using a ball of red wool. Now the play shifts gear and suddenly we are into Who’s Afraid of Virginia Woolf? territory. John complains, to no avail as it happens, that he has been cheated and demands his reward. Beatrice takes off her wig to show him her real hair. Her real self? In a wonderful scene of Sturm und Drang, Beatrice physically and verbally assaults John, only for it to end in a passionate embrace and kiss. They’re in love, they’re a couple, with all the love-hate mixed emotions that go with the territory. Their relationship goes through familiar stages. They measure out their lives in coffee spoons a la the Love Song J. Alfred Prufrock. Until in the end, they drink their coffee in silence together. That’s a wonderful touch and the best moment in the play. My advice would be to start from the last fifteen minutes and build the play from there.

“John and Beatrice” is a side-splitting, gut-wrenching tragicomedy that delves into the biggest questions and follies of love by exploring all the stages of a relationship – from the initial courting rituals of Man and Woman, to the trials and tribulations of being “locked up” in a room with someone for life. The native Quebecois-French text was translated into English and is now being colourfully brought to life by a diverse, European team of artist and performers with a unique vision and a unique answer to the question: “What does it mean to love?”