The comparison is drawn between the events in Fukushima in 2011 and Chernobyl in 1986. According to the International Nuclear and Radiological Event Scale (INES), both are classed as a ‘major accident’ – the only two reported nuclear events to have been classified in the highest category: the other categories are ‘serious accident’, ‘accident with wider consequences’, ‘accident with local consequences’, ‘serious incident’, ‘incident’, ‘anomaly’ and ‘deviation’. This isn’t, fundamentally, a show that seeks to attack the use of nuclear power – if it were, the audience would have been subjected to details about alternative sources of energy. 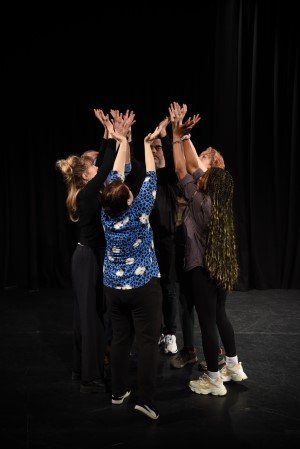 Instead, the play seeks to expose details of the disaster that have not been widely disclosed by way of official reports. It does this through utilising eyewitness descriptions – the production does not claim to have real-life stories: the five on-stage characters are, it would appear, amalgamations of various eyewitness testimonies with a few pinches of creative licence. The expressions of emotion in a work environment, for instance, are far too overt to be authentically Japanese, even in a crisis situation. Not that Japanese people won’t demonstrate enthusiasm while, for instance, singing karaoke or at dinner with friends, but there wouldn’t be much of that going on when a nuclear power plant starts leaking radioactive waste.

The production, then, is aimed at a ‘Western’ audience: or more specifically, a British production team has aimed it at audiences in Britain – it’s a slight surprise some of the characters didn’t drown their sorrows in a pub after being evacuated. By telling ‘personal’ stories, the show connects with its audiences, and while there are some details about, for example, various investigations into the nuclear disaster, the main focus is on the lives of ordinary people, which were irrevocably changed by events.

In that regard, the narrative arc follows the trend of contemporary plays that portray life as relatively humdrum and full of everyday routines – Keiko (Victoria Okoroafor) goes out of her way to emphasise there is nothing special about “today”, the day in question being 11 March 2011 – before a critical incident occurs that throws everything into disarray. But this play also bucks the trend in that the overall effect has been felt by very many people and is still going on. As the production would have it, a radioactive substance called caesium-134 flowed into the Pacific Ocean years after the disaster, causing all sorts of havoc with sea life, as far away as the west coast of the United States. Some of the reactors are still leaking to this day. Not then, your bog-standard ‘woe is me’ story.

The suppression of information about the disaster has much relevance in contemporary society: there are all sorts of other real-life topics to which the story relates. That said, the disaster itself isn’t so much portrayed as it is described. Fair enough – how does one actually go about portraying a nuclear disaster on stage? For better or worse, the descriptions are so detailed that, somewhat ironically, little is left to the imagination, and as more tales of destruction and devastation pour in, it does get rather relentless.

But the production also explores the aftermath of the event with sufficient depth, as opposed to a rushed through postscript. No prior knowledge of the disaster is assumed, and by the end, there’s no particular need (at least on my part) to rush away and try to find out more online (or indeed offline). It’s remarkable, really, that ninety minutes is all that is required to provide the audience with such a comprehensive understanding of what went on. Certain entrepreneurs even see business opportunities arising from a tragedy of this scale.

A story that deserves to be told, Fukushima is sometimes poetic, sometimes frantic, and sometimes poignant. It is always fascinating.

A dramatisation of the 2011 nuclear plant disaster following the combined impact of earthquake and tsunami, together with the ecological aftermath and worlwide consequences as radioactive debris is washed up on foreign coastlines.

Handel’s 1738 opera Serse (or Xerxes) is an exploration of power, love and human frailty. King Serse falls in love with the voice of his brother … END_OF_DOCUMENT_TOKEN_TO_BE_REPLACED

Lea Salonga has her fans. She also has some superfans, the ones who yell, “I love you Lea!” at almost every opportunity. If that wasn’t enough, there … END_OF_DOCUMENT_TOKEN_TO_BE_REPLACED

I have no hesitation in saying that the 1952 movie “Singin’ in the Rain” and its 1985 stage version is one of the greatest musicals of all time, … END_OF_DOCUMENT_TOKEN_TO_BE_REPLACED

There are, Maria Caruso was keen to emphasise in a post-show discussion, no wrong answers when it comes to responding to Metamorphosis or even … END_OF_DOCUMENT_TOKEN_TO_BE_REPLACED

Children of the Windrush generation, sisters Dawn and Marcia, grew up in the 1980s. In Roy Williams’ new play Dawn is shown struggling to care for … END_OF_DOCUMENT_TOKEN_TO_BE_REPLACED