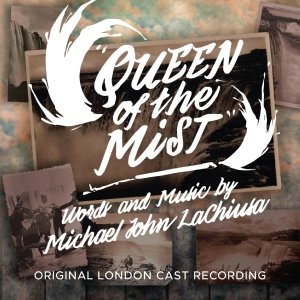 There’s a living room ambience to this recording, which goes well with its first incarnation as a production at the Jack Studio Theatre in south-east London, a fifty-seat venue. This cast recording immediately draws the listener in during the opening number ‘The Oaken Barrel’, and while some of melodies may be more than a tad repetitive, the same could be said for quite a few musicals out there. For the uninitiated, Queen of the Mist tells the story of Anna Edson Taylor (1838-1921) (Trudi Camilleri), who became renowned for falling down Niagara Falls in a barrel on 24th October 1901.

It takes a while to get to the point where she performs her greatest feat, and the listener is left in no doubt that there are, personal ambition aside, bills to be settled and living expenses to satisfy (Taylor was widowed quite young). But there’s a steely determination about the lady, whose resolve is ever more strengthened with the growing clamour of critics and naysayers who go as far as to suggest that anyone having anything to do with her exploits is, fundamentally, assisting a suicide mission.

Her schoolteacher demeanour remains even after the great plunge – of course she made it, otherwise this would be a rather short cast recording indeed, and a melancholy one at that. The storyline asserts that she feels she has nothing to lose, but her uncompromising approach has some impact on her potential commercial success in the years that follow. Camilleri’s singing voice is in good form in the album’s ‘I wish’ number, ‘There Is Greatness In Me’, and immediately thereafter, an exchange of letters between Anna and her sister Jane (Emily Juler) reveals a softer and humbler side to the outwardly tough-skinned and even borderline belligerent central character.

Jordan Li-Smith conducts a seven-piece band: the sound balance is of the high quality that a cast recording of this standard would be reasonably expected to achieve, and certainly does the lyrics and music more than justice. The musical numbers, taken together, vary sufficiently in tempo to maintain interest, though it is clear that this is not a show heavy on song-and-dance numbers. And Anna’s planning is meticulous: “I have to hire rivermen, expert rivermen who know the currents, the drop-offs, the reefs, the changes of the wind. Men who know what’s under the water, the limbs of dead trees, the sand at the bottom of the riverbed.”

Michael LaChuisa’s music can be sophisticated, intricate and complex, and these are not, for the most part, the sort of big, bold and brash showtunes that one ends up humming in one’s head for days afterwards. That isn’t to say the musical numbers aren’t tuneful (they are), and here, the music is appropriate to the early twentieth century setting. There’s even an element of barbershop quartet singing to be enjoyed – the harmonies are delightful.

Although portraying Anna as a rather eccentric person, the songs are careful not to castigate her too much – there seems an underlying respect, perhaps even admiration, for this lady even when the narrative practically has no choice but to acknowledge that some elements of her personality were unorthodox, to say the least. Some spoken dialogue is embedded within the songs, which helps if anything to understand the context of the lyrics. Setting aside the fact that I’ve also seen the production in its full splendour, it is, either way, easy to work out the facial expressions and palpable frustrations of the characters by listening to this cast recording. A worthy addition to the record collection of any musical theatre lover.

Queen Of The Mist, which received its UK premiere in a sold-out run at the Jack Studio Theatre in April, is based on the astounding and outrageous true story of Anna Edson Taylor, who in 1901 on her 63rd birthday set out to be the first person to survive a trip over Niagara Falls in a barrel of her own design. With a soaring score that incorporates turn of the century themes with LaChiusa’s insightful and engaging style, this award-winning musical is the story of how one woman risked death so that she could live.

The original 2011 Off-Broadway production of Queen Of The Mist won the Outer Critics Circle Award for Outstanding New Off-Broadway Musical and was nominated for six Drama Desk Awards, including Outstanding Musical.