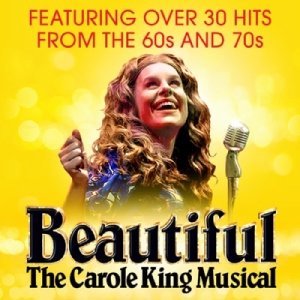 I had to admit that I’m not a big fan of jukebox musicals but I’m an enormous fan of Carole King having seen her live on a number of occasions, have nearly all of her albums and even worked for her record company back in the day! So, it was with some trepidation that I set out for Bromley to see Beautiful – The Carole King Musical at the Churchill Theatre but I have to admit that I was pleasantly surprised.

The plot itself is very thin as King had a mainly uneventful life. She met Gerry Goffin at 17 and they went on to write some of the greatest pop songs of all time. He was a bit of a serial adulterer and a manic depressive and his story is probably more interesting than King’s but she’s the famous one and she went onto re-invent herself after they split up and pure songwriters were replaced by singer-songwriters as music fashions changed. The story is padded out by the friendship King and Goffin had with another New York writing team, Cynthia Weil and Barry Mann as they slaved away in tiny offices in the Brill Building on Broadway churning out songs for the pop stars of the early sixties.

The first act introduces us to all the characters including Donnie Kirshner who was the music publisher who had the two song writing couples (and many others) under contract, driving them on to compete with each other to write songs for the likes of The Drifters, Bobby Vee, The Shirelles, The Chiffons and even King and Goffin’s baby sitter Eva Boyd who as Little Eva had a big hit with The Locomotion. Apart from meeting all the characters, the first act is basically a cavalcade of these artists performing songs such as One Fine Day, Take Good Care Of My Baby, Up On The Roof and You’ve Lost That Loving Feeling and at times it felt like an evening of sixties tribute acts rather than a musical.

It changed in the second act as King and Goffin go their separate ways and King decides to write her own lyrics and when she realises she’s the only person to sing them, she moves to Los Angeles and becomes a singer-songwriter recording a number of albums including Tapestry which went on to sell over 25 million copies worldwide. The show which starts with King on stage at Carnegie Hall in 1971 ends the same way with not a lot happening in between.

Daisy Wood-Davis who’s best known as Kim Butterfield in Hollyoaks sings and acts well without quite ever capturing King completely. She’s well supported by Laura Baldwin as Cynthia Weill with Adam Gillian and Cameron Sharp as their respective partners. The rest of the cast are all excellent especially the ensemble who play the various bands and solo singers of the time.

The production is of West End standard and has a delightful sixties feel to all the furniture, recording studios, office etc. – no expense seems to have been spared and it all works very smoothly. Douglas McGrath’s book compresses time and invents characters which is inevitable when telling someone’s life story in just over two hours but whilst one or two events jar, it does the job.

So, did I come out of the theatre liking jukebox musicals any more than when I went in? The answer is not really but I did come out with an even greater admiration of the songs King wrote and what she did for women in what was a male dominated world.

Beautiful – The Carole King Musical is on tour from now until August at nearly thirty towns and cities across the UK and if you like jukebox musicals then this is the show for you. If, however you’re a fan of Carole King, go anyway – you might not learn anything about her life, but you’ll have a great night out listening to the music you know and love.

Long before she was Carole King, the chart-topping music legend, she was an ordinary girl with an extraordinary talent.

Beautiful tells the inspiring true story of King’s remarkable rise to stardom, from being part of a hit song-writing team with her husband Gerry Goffin, to her relationship with fellow writers and best friends Cynthia Weil and Barry Mann, to becoming one of the most successful solo acts in popular music history.

Along the way, she wrote the soundtrack to a generation, with countless classics such as (You Make Me Feel Like) A Natural Woman, Take Good Care of My Baby, You’ve Got a Friend, So Far Away, It Might as Well Rain Until September, Up on the Roof, and The Locomotion.