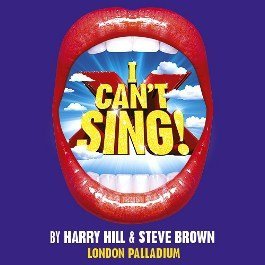 Well, it’s not as bad as you might have feared, or hoped, depending on your relationship with Simon Cowell. Nor is it as good as the mighty machinery of advance praise would have had you believe. If this sounds like damnation with faint praise, that’s possibly because it is. I Can’t Sing is OK. This conclusion hardly amounts to the coveted “Three Yesses” refrain of the TV talent show, but at a time when West End musicals by giants of the genre are crashing and burning in the wastelands of audience indifference, OK is not to be sneezed at.

To take the trouble first, and there’s been plenty of it; the show has had the kind of publicity you die from, full of tales – true ones – about intervals stretched to nearly an hour because of technical glitches that have been not so much hiccups as life-threatening burps. People walked out, of course they did; they had trains to catch and families to reunite with. This whole unwanted sub-plot gave fresh currency to the old gag about the unimpressed critic who decided to extend the interval by one hour and use it for travel purposes. Or indeed the one who said: “I caught the show at a disadvantage. The curtain was up.”

Seeing it now, with these – let’s try and be generous here – teething troubles sorted, you do wonder why there were such problems. It’s not as if the second half transports us to some breathtaking  celestial dreamscape, unless you put the X-Factor dressing rooms in that category.

The second problem is plain old greed. The TV show was a smash, whether or not you find that an inconvenient truth. And it was a smash in spite of or because of the skewed but compelling personality of its begetter Cowell. For all that his show traded, partly, in jumped-up mediocrity, he did seem to dwell in some weird kind of reality. He was truculent, savvy, hugely successful in the business, oddly vulnerable and welcomely forthright.

What this musical has done by trying to extend X Factor’s life and reach onto the live stage is a modern counterpart to a trick which Lloyd Webber – this musical’s landlord as owner of the Palladium – was up to back in the Seventies; make the punters familiar with the material well before the show opens so that by the time it’s up and running, the tunes will have earwormed their way into public ownership and the queues will be stretching round the proverbial block. You’ve seen versions of this second-life logic at work all over the West End, from the re-worked movies, through the Abba and Queen musicals to the coming of the Pythons.

I Can’t Sing is ‘Simon Cowell the Musical’. Seen as such, it’s a bold shot, with the central figure alternately lauded and lampooned, apparently to his delight and approval. No, he can’t sing, but he does know some people who can. Foremost among these is the young black contestant Chenice with her sure-fire backstory of life in a cramped caravan beneath the urban motorway and a dying, doting grand-dad in an iron lung. She inevitably powers her way through the early stages of the competition with its also-rans of talking dogs, sub-Subo’s and plain dreadful singers with hopeless delusions.

Here is the second problem. If Chenice (Cynthia Erivo) can’t sing, then neither could Ella Fitzgerald, or Aretha Franklin, or Dionne Warwick or… you get the point. So the gag of her singing the title track – one of the evening’s three really sound songs by composer Steve Brown and lyricist Harry Hill – is a bit of a bee sting. One go and it’s curtains.

You know the girl’s going to win. Even allowing for the scandalous injustices that the show has thrown up over the years to our eager outrage, there’s no other possible result. Everything about her, from the mousey modesty to the radiator smile, is making her the people’s shoo-in. To say nothing of a voice (proper discovery, this) that hardly needs to break mere chandeliers when it can take out glass ceilings at a single, astrological, note.

As for Cowell himself, his treatment as a kind of dead-eyed messiah makes him strangely marginal. Much more present and rewarding is Simon Bailey’s wonderfully angular compere Liam O’Deary. As for Steve Brown’s tunes, more faint praise I’m afraid, though not of the kind intended to damn. In this opportunistic show, they seem, so to speak, written by numbers, with the result that they sound just like the kind of songs you hear in musicals.

Here’s a thought, even if it’s too late. Whether you liked or loathed the TV show, it could do suspense like Brunel’s Clifton Suspension Bridge over the Avon Gorge. The musical could have plugged into the original’s grid of tension by having a less predictable winner – ie matched the marvellous Cynthia Erivo with plausible rivals. A tall order sure, but we’re talking SiCo here.

We, the audience, could have had a phone vote, just like in the real thing and then had a vested interest in the climax. In fact the interval could have been used for this purpose. There was enough time.

I Can’t Sing The X Factor Musical
Irreverent, anarchic, yet strangely touching, this spectacular musical comedy features a host of new and deliriously funny songs that can’t fail to delight, whether you’re a fan of The X Factor or a sceptic. On the surface it’s the story of one girl’s journey in search of triumph in the final round of the X-Factor. But the fun of I Can’t Sing! is all in the getting there.