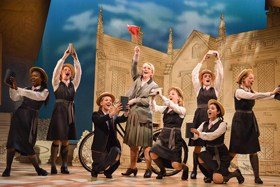 It is 1963 and the Dame Dorothea Dosserdale School for Girls raises free spirits and independent thinkers. That is until the new headmistress Miss Bleacher arrives. The Victorian pedagogue arrives at the school with the aim of producing ‘the future mothers of the future sons of England’. She is determined to stamp out ‘indecent and unnatural behaviour’ and, abetted by goody two shoes Brenda Smears, she sets out to unmask two sixth formers caught in flagrante in the art room. But the spirit of Dame Dorothea lingers on and the girls are not giving in without a fight.

With a smart, slick book by Maureen Chadwick the story is well paced and never drags, which is no surprise as Chadwick is a successful TV writer (her credits include Bad Girls, Footballers’ Wives and Waterloo Road). Composer and lyricist Kath Gotts produces song after song of memorable, foot tapping tunes. This fast paced, energetic production is directed by the ever impressive Anna Linstrum.

In the cast of twelve there are some stand out performances. Georgia Oldman’s Brenda Smears is played perfectly as nervy and swotty but not too unlikeable. We realise she’s just a young girl desperate to fit in and find her place. Brianna Ogunbawo, as Daimler Jones, makes her professional stage debut, and what a debut. Her solo ‘Too Much In Love’ shows off her strong voice and her particularly melodious lower register. If this is her debut, I can’t wait to see her again in five years time.

Stage doyenne Rosemary Ashe impresses throughout as Miss Bleacher, the staid, uptight headmistress. She is without equal in Act Two. In the penultimate number, ‘I Ask For Nothing’, a passionate, Shirley Bassey-esque diva is unleashed; she ascends a staircase and exits the stage in a dramatic flourish of arm waving and paper throwing. Ashe was simply marvellous.

David Farley’s successful cartoon inspired set moves from bland black and white line drawings in the first act to bright colours and props reminiscent of Pop Art as the story moves to London in the second act.

Crush is hugely enjoyable. Don’t expect any serious contemplations; do expect jolly hockey sticks and good tunes. It’s a light musical comedy and as such is very successful.

St. Trinians meets Malory Towers in new musical Crush: a coming-of-age romp that celebrates schoolgirl friendships and fighting for what you believe in!