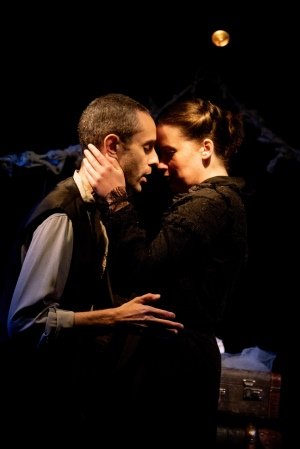 A large red shipping container dominates the stage at Wilton’s Music Hall as the audience enters the auditorium. Then the lights go down and a man with an even larger strawberry blonde beard and top hat pops out of the roof and starts to sing “Travelers Curse”. This is Ben Caplan as “The Wanderer” and Old Stock – a Refugee Love Story is up and running and what an engaging story it is.

The refugees are Chaim, a young Romanian man escaping the pogroms that have resulted in the murder of most of his family and Chaya, a slightly older Romanian widow who has left the old country with the rest of her family to get away from the typhus epidemic that has claimed the life of her husband. They meet on a boat newly arrived in Canada at the port of Halifax and for the next seventy minutes we hear their story told by the small cast through song and dialogue.

Caplan as “The Wanderer” tells the tale playing guitar and banjo addressing the audience directly and acting as Master of Ceremonies, rabbi and synagogue cantor. He’s helped in the telling of the narrative by Mary Fay Coady as Chaya (who also plays delightful violin) and Eric Da Costa as Chaim (on various woodwind instruments). The rest of the band is Kelsey McNulty on keyboards and accordion and Jeff Kingsbury on drums and percussion and together they play a mixture of klezmer and folk music along with traditional Jewish synagogue songs and what a superb blend it is.

Chaim and Chaya’s story is one of a marriage of convenience under trying circumstances in a strange, cold, forbidding foreign country and we watch them live their lives as they grow to love each other and experience various tragedies, anti-Semitism before triumphing over difficult situations. The characters maybe Orthodox Jews in a Christian country but this is a universal tale and they could be refugees from any country at any time over the past two hundred years or so and sadly carries on to this very day.

The piece was created by Caplan (who wrote most of the songs), Christian Barry (who also directs) and Hannah Moscovitch who’s a direct descendant of Chaya and Chaim and is telling her family’s story. The set (designed by Barry) is a magical, cornucopia of delightful objects and is revealed when the container is opened up drawing the audience into Chaya and Chaim’s life.

Caplan is an imposing and charismatic narrator, Greek chorus and character with a voice that rides the octaves from high tenor to deep bass baritone. When in his gravelly, low register he has a touch of the Tom Waits about him and one or two songs could easily come from the Waits songbook but that’s no bad thing. He sings like a dream, is an enthusiastic if somewhat eccentric dancer and keeps the whole piece together, breaking the fourth wall and getting the audience clapping along to the exuberant klezmer songs.

If I had one small criticism it is that on a couple of occasions, Caplan veers away from the story particularly in an anachronistic song called “Truth Doesn’t Live In A Book” which is about oral tradition which begins “Always have a little salt with your tequila, don’t smoke your stash if you’re gonna be a dealer” and later on with an strange, unfinished tale about a mysterious stranger at someone’s door. They don’t have anything to do with the narrative and they break the spell as we’re disconnected from Chaya and Chaim’s captivating story.

2b, the Canadian theatre company who produced the piece should be congratulated for taking a chance and bringing this wonderful piece of theatre to London. Its story of triumph over tragedy is vigorous and full of vitality – a true celebration of life.

Back in the sixties there was a comedy album called “You Don’t Have To Be Jewish” and whilst “Old Stock – A Refugee Love Story” is intrinsically a very Jewish story, you don’t have to be of the faith to enjoy a love story that will appeal to anyone with a heart and soul and a love of life.

Sex, religion, tragedy and triumph…
This darkly funny musical folk tale erupts from a shipping container, lifts you by the collar and takes you on a whirlwind exploration of what love actually means across the centuries.

Let the klezmer music take you on the journey of Chaim and Chaya as they flee Romania and arrive as ‘outsiders’ to Canada in 1908.

Narrated by the anarchic Wanderer (Ben Caplan), Old Stock: A Refugee Love Story is an 80-minute shape-shifting, genre-bending, gig-meets-live-theatre experience that is as timeless as the tale itself.