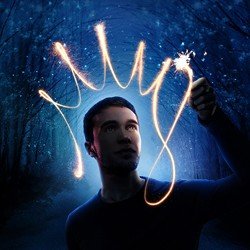 “Join us, come and waste an hour or two,” a lyric sung by the Leading Player (Genevieve Nicole) in the first verse of the first musical number of Pippin, is not an opening gambit that sold the show to me, and I immediately wondered if this was indeed about to be a waste of time. There seems to be some sort of reverse psychology process going on, at least as far as that one line goes. This is a production that turned out to be thoroughly engaging, and the storyline isn’t as indecipherable as an introductory article in the programme suggests, though it is occasionally bizarre.

Going off the beaten path rather adds to the appeal of this musical. I’m usually inclined to think ‘less is more’, but here, it’s more a case of ‘the more, the merrier’. The plot meanders, partly because of its use of what I interpreted to be characters in a touring theatre company, in turn, playing characters in the life and times of Pippin (Jonathan Carlton). Charles (Rhidian Marc), Pippin’s father, is a monarch with executive powers, and proposes an invasion of Southwark. It can be reasonably assumed he succeeds, given a later attempt to depose what is perceived as tyranny; most of the rest of the show is spent following Pippin as goes on a voyage of self-discovery.

There is no point in trying to accurately work out when the show is set – the costumes (Maeve Black) are generally of a previous generation, but it’s difficult if not impossible to be any more specific than that. The cast use the performance space brilliantly. With the audience sat on three sides, the show is blocked appropriately, with few in the audience, if any, at a disadvantage whatever their vantage point is. It’s not only a visual spectacle – the sound quality is superb, with the cast of ten sounding like at least twenty during the full ensemble numbers, and the eight-piece band, led by Zach Flis, were sublime.

There’s a certain silliness to the humour – the equally heavily accented Charles and Fastrada (Mairi Barclay) are hammed up, for instance. Elsewhere, swipes are taken at the establishment, including a call to revolution, and an unpleasant experience in a church, following which Pippin ruefully observes, “It wasn’t an angel who touched me.” Nicole’s Leading Player has a gloriously beautiful and strong singing vocal, a real pleasure to listen to, despite some antagonism on the character’s part, particularly towards Catherine (Tessa Kadler). This is also one of those shows where there’s a song and dance here and there just so the audience can enjoy the moment for what it is. That only works if it’s performed well – which it is in this case: the choreography has plenty of heart.

The production has uncovered a significant talent in Jonathan Carlton. In fine form, he puts in a highly nuanced performance, a character unsure and vulnerable at times, and at others confident and defiant. His vocal range is quite extraordinary, demonstrated best in the ‘I wish’ number, “Corner of the Sky” and Act One closer, “Morning Glow”. On one level, the show takes a rather long time just to say contentment can be found in ordinary living – life is what you make of it and all that.

There’s more to this production than that, however – but I mustn’t give too much away. What is worth mentioning, though, is the retention of Olivia Faulkner’s biography in the programme. Faulkner was taken by her own hand before the show transferred to Southwark Playhouse following its first run at Hope Mill Theatre in Manchester; a foundation has been set up in her name to raise awareness of mental health in the dance and musical theatre industry. The cast and creatives have pulled together and strengthened their resolve – the result is a marvellous musical, a captivating experience full of energy and vitality. I’ve already booked to see it all again.

Vaudeville, magic, comedy, romance – life is an adventure and Pippin has it all.
A brand-new production of the multi-Tony Award-winning musical by Grammy and Academy recipient Stephen Schwartz returns to London for the first time in 5 years.

A soul-searching exploration of one man’s journey to find himself, his place and purpose in life, Pippin is a musical about an ordinary man on an extraordinary journey. Featuring a stunning score including classics “Magic to Do” and “Corner of the Sky,” Pippin was originally directed by the great Bob Fosse and recently completed a hugely successful Broadway revival. This new production spreads a darkness over the innocent tale of the exciting life and adventures of young Prince Pippin, told by a mysterious troupe of Victorian Vaudeville players who promise the audience ‘a finale you will remember for the rest of your lives…’