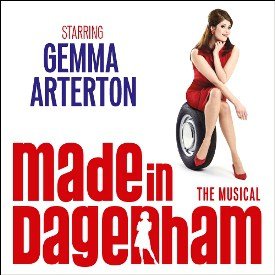 Over the last few years London’s West-End has seen all manner of new musicals and plays come and go, some have stayed longer than others of course. One of the latest additions to grace the illustrious West-End line-up is Made In Dagenham. A new musical with music by David Arnold, lyrics by Richard Thomas and directed by Rupert Goold, based on the 2010 film of the same name, both having been inspired by true events. This new musical is taking the theatre world by storm and will only go from strength to strength.

In 1968 the female machinists at the Ford Dagenham car plant were told their job role had been downgraded from skilled to unskilled. On top of being paid less than the male employees they stepped away from their sewing machines and raised their voices again and again until they were heard. This bold move and refusal to be ignored changed the face of women’s rights and also caught the attention of the entire world. Who would have believed a noble fight such as equal pay for women in the workplace would be immortalised in a West End musical? Well, it has and thankfully so as well.

From the moment the lights come up and the first chord is played it becomes clear just how entertaining and fun the show is going to be. The first thing that hits you is the impressive set and how it is utilised and presented. Without giving away too much, think car parts. The opening number really sets the tone and encapsulates the ethos of the entire show, ‘if you want something done, ask a busy woman.’ The song strikes a lot of chords with the audience, for very different reasons as well as being fun and extremely funny. There are songs that are emotive and force you to sit back and listen with undivided attention but generally the songs help tell the story perfectly with razor sharp comedic content. The story really does take the audience on a journey from start to finish, allowing you to connect with the characters and truly understand the story.

Gemma Arterton plays Rita O’Grady, the central character in the show and also the film where the role was played by Sally Hawkins. Arterton’s portrayal of Rita O’Grady is perfectly balanced in strength and vulnerability, making her endearing and her performance extremely demanding. Arterton is supported by possibly one of the most colourful and funniest group of women ever, the blend of characters complement one another perfectly and the language used is, well rather blue but by no means gratuitous. The strength the lead female ensemble have is so powerful it actually makes you wonder how the men in power at Ford dare to take them on.

The entire cast is made up of a truly stellar line-up of actors and performers. You will most certainly recognise some of them from popular television programmes. It is safe to say there is not one weak link in the entire cast, they work perfectly as a unit to deliver a slick, funny, hard-hitting and entertaining show. Made in Dagenham truly has all the elements that are needed to make a smash-hit musical, a collection of wonderful and original songs, a hilarious and powerful script, an amazing cast and one extremely impressive set.

The beauty of this new musical is that it goes beyond the central message but never loses focus of the story. Beyond equal pay for women this show carries many other important messages for women’s rights and the power of strength, determination, friendship and love. This is most certainly a show that has something for everyone, maybe not young children but definitely all adult audiences. If there is any new musical that you should take a chance on, this is it.

In Made In Dagenham The Musical, shop steward Rita O’Grady joins with union rep Albert Passingham to get a better deal for these hard-done-by women, but soon discovers there’s more to the dispute than she realised: women are paid an appalling fraction of the men’s wages for the same work across the board. Refusing to put up with it any longer, Rita leads a strike by for equal pay. A grinding labour and political struggle follows that will ultimately advance the cause of women’s rights around the world.

The well-known actor Robert Daws has worked with writer William Humble many times and in 2017 asked him if he would be interested in writing a one-man play about P G Wodehouse, “Maybe with some songs”. The result is Wodehouse in Wonderland. I am very familiar with PG Wodehouse (known as Plum to his family […]