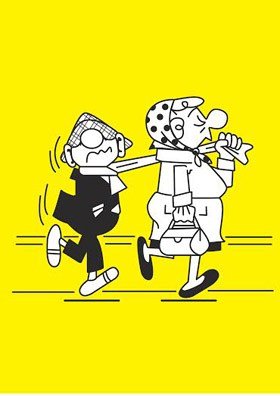 You know the stage is a little too crowded when an actor practically falls into you during one of the ensemble numbers and, through the actions of quick-thinking colleagues, is up again before they were even technically down. But kudos to the cast and creatives of this production of Andy Capp The Musical, who haven’t cut down on the number of actors playing all the parts required for an undiluted, full-bodied complete non-adaptation of this Eighties musical, whose music is styled in a sort of cross between ‘Madness’ and Victorian music hall.

I’ve called it undiluted – however, if you really want to drill down and take it apart line by line, there are very slight differences between the original script and the lines as delivered in the Finborough Theatre in 2016, but always an improvement. Some good use of the actor-musician role is made in several places, thus making economical use of limited space, while staying true to the stage directions from the 1982 West End production: “The band is on stage…” Even so, it’s Tim Shaw as musical director on keyboards that carries the music for the most part, and very deftly too.

While this Andy Capp (Roger Alborough) doesn’t quite have his, um, cap pulled down as far as the cartoon character, the two otherwise have much in common. Not being a reader of the Daily Mirror newspaper (where the Andy Capp stories are published), I have little affinity with Capp, and so found myself poring through online archives of comic strips. Needless to say, it’s not my usual method of prepping for press night. It was a revelation nonetheless.

The Andy Capp on stage is both similar and different to the Andy Capp in print. The ‘man in the Mirror’ (so to speak) seems sharper, but then perhaps his story appears in just a few lines and pictures, as opposed to having a couple of hours to develop a single plot – through song. Both are just as blunt, though, and neither can get by for very long without turning to the bottle, who seems to be Capp’s best friend.

There’s a certain level of irreverence that permeates throughout, prompting audible gasps from the audience at a putdown directed at Andy’s wife Flo (Lynn Robertson Hay) that overstepped the mark; without it, though, the musical theatre ending that we eventually enjoy wouldn’t be quite so thrilling and impactful. Both Mrs Scrimmett (Paddy Navin) and Mr Scrimmett (Terence Frisch) are hilarious, though in very different ways, with the matriarch being the closest thing this show gets to Hyacinth Bucket out of BBC Television’s Keeping Up Appearances.

We’ve a love story, too – this is a musical, after all, between the Scrimmetts’ daughter, Raquel (Tori Hargreaves) and the absurdly named Elvis Horsepole (a very likeable Tom Pepper). Despite this, the musical is light on heightening romantic and sweet emotions, quickly returning the narrative to the sheer reality of life. Besides Capp, my favourite of the lot was Geordie (David Muscat), doubling up as the show’s narrator, with such a witty and observant disposition. Rather like Che in Lloyd Webber’s Evita, it’s a great role in the right hands, and Muscat comes up trumps.

I suppose it’s the political incorrectness that makes Andy Capp The Musical rather refreshing, just as the comic strip continues to be popular. In a world where one must always be watching one’s words ever-increasingly carefully, Capp’s sheer honesty overrides any occasional tactlessness. If only the real world were just as forgiving. There are also elements in Andy Capp’s character that a lot of people can recognise in others, perhaps even themselves.

I can’t fault Chris Cuming’s choreography – quite how that many actors engage in a full song and dance several times over in such a small studio space and not knock into each other is incredible. This show is incredibly amusing, too, particularly in the numbers ‘Good Old Legs’ and ‘I Ought To Be Ashamed of Myself’. The ensemble numbers are mostly celebratory, there were some twists and turns in the plot, the tunes are hummable, and there’s some food for thought in the show’s exploration of life’s true priorities. What’s not to like? Not much. I do hope this show transfers or at least finds itself back at the Finborough at some point – it deserves a much larger audience and many more performances.

The first professional UK production for more than 30 years
ANDY CAPP THE MUSICAL is now completely sold out for the entire run.

In a production commissioned by the Finborough Theatre, the first professional UK production in more than 30 years of Andy Capp The Musical by Alan Price and Trevor Peacock.

Work-shy Andy squanders his rent money on beer and stumbles home late again. His long suffering missus Flo vows to leave him, but Andy promises his racing pigeons will one day make them a fortune.

A few doors down, innocent young lovers Elvis and Raquel plan their wedding, but will their lives turn out just like Andy and Flo? Not if Raquel’s mother, Mrs Scrimmett, has anything to do with it…

With Alan Price’s bouncy rhythms and Trevor Peacock’s razor sharp lyrics, this rediscovered British musical is a warm-hearted look at relationships and the simple pleasures in overcoming life’s obstacles – guaranteed to stamp a smile on your face.

Andy Capp The Musical premiered in 1982 at the Royal Exchange Theatre, Manchester, and then transferred to the West End, where it was nominated for the Olivier Award for Musical of the Year. Tom Courtenay starred as Andy and Alan Price, the show’s composer and former keyboardist for the popular band The Animals, played the role of Geordie.

Howdy pardners, how y’all doing? It’s time to saddle up the old buckeroo and mosey on down to the Colab Tavern for a bit of immersive theatre called The West. Welcome to Olverton, a small town in the old west which is trying to get itself back on its feet after being ravaged by sandstorms. […]