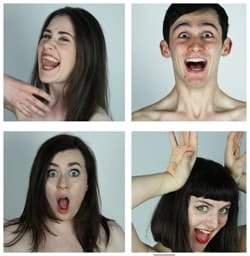 Conversation was difficult for Ian (Alasdair Melrose) from the beginning. It’s not entirely his fault, however. Grab ‘Em By The Pussy starts, you see, with deliberately overly loud nightclub-style music in a bar. Even members of the audience had to raise their voices in order to be heard before the show started. It didn’t help, once the lights went down for the show proper, that Ian had a nervous disposition, stemming from either a tenderness of youth or anxiety about meeting Maisy (Alice Wolff-Whitehouse) for the first time. Perhaps it was both. Melrose puts across Ian’s vulnerability and very British manners so naturalistically, and it was difficult not to have at least some sympathy for him by the end of the evening’s proceedings.

I trust it is not too much of a spoiler to say there is some grabbing down below that occurs. It takes the form of a death-like creature, which makes an appearance at each scene change. I can only assume the role is shared between two or more performers, as the character is not listed separately in the cast list, and it is rare for all five to be on stage at the same time. I didn’t personally find the Grabber (as I call him), a non-speaking character, added much to the narrative.

The humour, whilst not exactly family-friendly, has a sort of Marmite-like quality to it, and overall, I loved a lot more of it than I loathed. The musical numbers are slow to come by in the first half, such that I wondered whether this would be better described as a ‘play with words’ rather than a ‘musical’, but there’s no stopping them coming (ahem) in the second half. Occasionally, an imperfect sound balance between the recorded music accompanying vocals without microphones meant a line or two was difficult to decipher (from my vantage point anyway).

Maisy is frustrated, for reasons that become clear in a sardonic and comical musical number that established an excellent rapport with the audience. This in turn allowed for a greater appreciation of the show’s humour and the character’s exasperation. As a consequence, the rapport went up even more, so the audience’s appreciation rose, and so on as the show progressed. The connection with the audience is this production’s key strength.

This all could, however, have been a tad punchier. The most ‘in your face’ character is in the form of Roland Ryland (Adam Ralph Moysen), a celebrity chart music singer whose rap was simply too slow to have much credibility. I take it this was deliberate, showing this self-spoken performer to be not everything he was hyped up to be. Maisy’s friends Jackie (Grace Russell) and Roxanne (Rachel Loughran), eventually come to their senses, though quite how it happened was an unexpected surprise.

This unexpected surprise aside, the musical was rather more pleasant than I would have thought a show of a title like this perhaps ought to be. Not a single gasp was elicited from the audience: there was simply nothing to gasp at. The show’s big ballad, a two-hander between Maisy and Ian, was very much in the style of ‘The Song That Goes Like This’ from Spamalot, with semi-mocking lines such as, “My love is endless, just like this song.”

The lyrics advance the narrative, with just the one showstopping song-and-dance extravaganza, in which the cast demonstrate they perform as an ensemble with the same high standards exhibited in the solo or duet numbers. All things considered, this is a funny and forthright production with a definite fringe factor.

GRAB ‘EM BY THE PUSSY
by Caroline Buckley
A new, surreal comedy musical about grabbing pussy. In a world where women are touched daily in places they didn’t even know they had, outcast Maisy has never been objectified. Bless her. Join her on her quest to be fondled.

Explore a world where reality and fiction are blurred in an intoxicated dreamscape. It will be weird. It will be hilarious. And there will be songs such as, No One Will Let Me Blow Them, I Can Carry Heavy Objects Long Distances Without Needing a Rest and Seem Like A Corpse. There might even be a comedy dance routine or two. One thing is for sure: nobody will leave untouched!

Grab ‘Em is a serio-comic response to the world’s reaction to Trump’s “grab ‘em by the pussy” which highlighted the mass normalisation of sexual harassment. We explore cat calling and bum slapping with a funky beat, we’ll show you ‘grab hands’ not ‘jazz hands,’ and of course we’ll grab you by the pussy. After all, ‘you asked for it.’ Didn’t you?

First performed in the Old Red Lion in February Grab ‘Em By The Pussy, written by Caroline Buckley, directed by Bence Kalo and featuring music by Josh Wells, was developed into a full-length show for The Space’s Summer Season

Grab ‘Em is part of a double bill, tickets also gain you entry to The Trail of Le Singe by the Heretical Historians: A dark comic farce about a shipwrecked monkey mistaken for a French spy.

Think back. Has anyone ever said to you that looks don’t matter, its personality that counts’ Anyone … END_OF_DOCUMENT_TOKEN_TO_BE_REPLACED