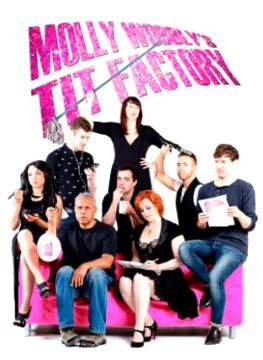 Performed within the intimate setting of The Phoenix Arts Club, Molly Wobbly is an iconoclastic performance in the ilk of The Rocky Horror Picture Show, The Little Shop of Horrors and The Forbidden Planet!

Do not expect Lloyd Webber-esque show tunes, big production values or multiple costume changes, but do expect risqué and salacious lyrics and a lexicon of Boob Jokes. If bawdy jokes and word play coupled with sexual innuendo make you chuckle, if you’re a fan of The “Carry On” style of films, then you should LOVE LOVE LOVE Molly Wobby (like I did!)

Set amongst the folk of Mammary Lane (not too unlike the characters you’d find on Wisteria Lane in Desperate House Wives) we meet three couples who each own their own independent business; Haberdashery, Hairdressers and an Horologist. All characters are disgruntled and caught somewhat in a loveless and miss-matched marriage. To be honest they are all in dire need of a “make over”!

Cue entrance of the mysterious stranger – with an entrance that is reminiscent of Darry Van Horne’s entrance in Witches of Eastwick, this stranger is a cross between Riff Raff (Rocky Horror) a Troll (80s child’s toy with brightly coloured hair) and the child catcher from Chitty Chitty Bang Bang.  Russell Morton portrays this mysterious character with flair, his mannerisms are slick and comic timing first class. Russell delivers a consistent portrayal of awkward and stylised movements that are consistent and brilliantly executed.

The audience, like the characters, are soon under the spell of this Mysterious Stranger as he weaves his magic and takes each of the characters on a journey! A journey where “the time has come to make this land a more beautiful place” he transports them to a place where he can not only dazzle you, but also vajazzle you!

Not for the prudes amongst us the audience is treated to a number of spectacularly performed numbers, some of which I found myself still singing as I left the show… I now know every word for the female breasts and have learnt all about a “One Night Stand” Kitten style.

All the cast are strong, but I would like to mention three: Rebeccca Ridout, Russell Morton and Jordan Lee Davies.

Ordinarily Leanne Jones (Olivier Award Winner for her work on Hairspray) plays the character of Margaret, however on Saturdays’ matinee we had her understudy Rebecca Ridout. Rebecca was superb as the rather uptight English wife and long standing member of C.L.I.T. When she sang her solo piece “Designed by Margaret Brown”  the room was silenced by her emotional interpretation. I was really moved by the meaning she put in to the performance, her solo being one of the pieces highlights.

Jordan Lee Davies (some may remember him from BBC’s The Voice 2013) plays both a Catholic Nun and Kitten; His execution is spot on for both of these roles, his voice is superb and his style of performance spot on. He too delivers some tour de force musical moments including ‘Guardian Angel’ and “One Night Stand”.

In my opinion the show is slick, the performances tight and the high notes were all hit with ease. It’s a well-cast and well-written production. All in all a fun production that I hope gets the opportunity to transfer and play to bigger audiences.

Read our previous article about the show

Pennyroyal is a conversation. It’s a conversation, an ongoing conversation, between two sisters, Chris and Daff, that, like a garden, is tended carefully, nurtured, watered, given love, and maybe even talked to. And, of course, has manure thrown all over it to ensure that it is robust and resilient and will survive. And, in fact, […]