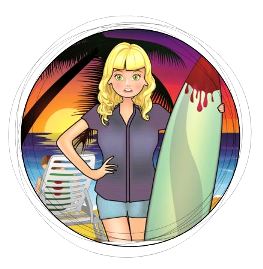 Every now and then, a show comes along with a title that makes you say ‘ This I have to see’. Riptide The Slasher Musical is one of those shows. A slasher musical – it shouldn’t work.

The story is simple enough: a group of friends go on a Spring break to a place called Innocent Beach, that has a legend to it about a surfer who died and is haunting the area. How old is the legend, enquires a character? About three years is the response, we’re less than five minutes in and the audience is already howling with laughter.

We have our nerd/jock/hot girl stereotypes, lots of comedy about popularity and dumbing yourself down to be liked, a boy who likes girl, another boy who likes the same girl and a third boy who likes the first boy, and because this is a story about teenagers on a Spring break, all everyone really want to do is get drunk and make questionable decisions. They are likeable characters and played by a very charming cast.

The songs are excellent and performed very well, with some speech-singing – near rap but not quite – working well to give you a lot of information in very little time. One song stood out, the death song of Tiffany was such a homage to the Les Miserables classic ‘A Little Fall of Rain’ that it eventually used some of the words to the song, to the amusement of everyone in the know, which appeared to be the entire audience. We also have a longing song of love from the gay jock who is in the closet, adorably goofy choreography and a short appearance by the assistant producer in the role of Jimmy, a snarky character who is the first to die, by way of a starfish shoved into the side of his head.

Oh yeah, the deaths. The are absolutely glorious, with blood splashing towards the audience, a neck snapped, a slit throat, and my favourite: impaled by surf board with guts hanging out. Riptide isn’t out to scare you, and I thoroughly enjoyed the way they’ve done it. I am of course not going to reveal who the killer is and how it goes down, but the song the killer sings to explain their reasons was one of the highlights of the show.

In the end, the dead are dead and no one has learned anything. The crowd cheers and we giggle our way out to the street, after one very enjoyable hour. The show is short and sweet, and while it needs some work, it leaves you with a massive grin and you find yourself telling everyone who might be remotely interested how hilarious it was.

Do you like ridiculous slasher movies with stupid teenagers with little sense, catchy songs and a lot of laughs? Good, then you will have an excellent time seeing this show. Unfortunately only on for four days, and it was near sold out before it even opened. I hope this is not the last we see of Riptide!

Join Chad and his buddies on the Spring Break trip to end them all!  Destination: Innocent Beach, USA. But danger lurks in the water – Shelley has a grudge, and he’s thirsty for revenge.

The Beach Boys meet Freddie Krueger in this slasher surf spectacular. With sweeping romance, epic tunes and just the kind of guys you don’t want to meet on vacation, this is one road trip you’ll never forget…

Death is coming to innocent beach – and he doesn’t give a shit about your tan.

This isn’t the first production to go down the road of referencing a one-star review of their show (from a different publication, I hasten to add). This sort of tactic sometimes works, like the show that apparently sold tickets having publicised itself as the worst show at the Edinburgh Festival Fringe – quite a claim, […]