Home » Reviews » Musical » Six: ‘something about the feistiness, the sassiness, the riotousness of it all’ 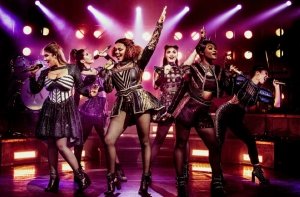 I actually don’t remember the six wives of Henry VIII from my GCSEs (an early line in Six asks the audience if it does), for the simple reason that I didn’t choose to study history at GCSE – it being one of the ‘options’ that I didn’t pick, and even classmates that did do GCSE History seemed to be familiar with the minutiae of the Second World War rather than Tudor England. But please do not let the subject matter put you off. As far as the production goes, there is some artistic licence going on, particularly in the show’s final number, which forces a musical theatre happy ending on a narrative that would otherwise have followed the conventional ‘divorced, beheaded, died, divorced, beheaded, survived’ storyline in its totality.

The show’s primary purpose, then, is to entertain, though there are a lot – and I mean a lot – of things that are historically accurate. Toby Marlow and Lucy Moss’ book and lyrics express matters in contemporary language that will appeal to the millennials far more than the baby boomers. Anna of Cleves (Alexia McIntosh), for instance, had her portrait painted by Hans Holbein the Younger. Or, as the show puts it, she didn’t exactly look like her profile picture.

The set is kept simple, with the feel and atmosphere of a gig. At the performance I attended, it was evident that the production has its fans and repeat customers, with each and every musical number enthusiastically applauded with whooping and cheering. There were no misgivings about covers and understudies here: Courtney Stapleton, standing in for Natalie Paris as Jane Seymour, was given much encouragement by the regulars looking forward to her first performance covering the part of Seymour. Stapleton gave a rousing rendering of ‘Heart of Stone’, delivered with a passion that betrayed the musical number’s title, much to the audience’s pleasure and delight.

The on-stage sound didn’t seem nearly as loud as it did when I saw the show at the 2018 Edinburgh Festival Fringe, though I am happy to accept that I didn’t anticipate the concert format of the show first time around, so it may have been a matter of personal perception and expectation. The choreography (Carrie-Anne Ingrouille) is vibrant and lively, and with the six queens leaving the stage only momentarily, the amount of energy expended is nothing short of extraordinary in this fast-paced, interval-free production.

The band, led by Katy Richardson, or ‘Ladies in Waiting’, as they are named in the show’s programme, are visible to all on stage. It is good (and, dare I say it, topical) to see an all-female on-stage team, in a production that keeps the focus on the wives and not on the King. “What hurts more than a broken heart,” Seymour wants to know. “A severed head,” comes the deadpan response from Anne Boleyn (Millie O’Connell). But far from trivialising such matters, the show repeatedly reflects on how women were (mis)treated. Even Cleves, in the end, more than materially contented with a divorce settlement that included being the owner-occupier of Richmond Palace (“I’m the queen of the castle! / Get down, you dirty rascal!” she sings confidently), was benignly neglected by His Majesty.

There’s a good mix of musical styles amongst the ten musical numbers, though most of the melodies are firmly in the style of what I call ‘minicab music’ – the sort of chart music tunes I would only listen to if I were being driven home and the driver just so happened to have the radio on. But there’s something about the feistiness, the sassiness, the riotousness of it all. I liked the music so much I bought the cast recording on the way out. It only leaves me to wish Six a long and glorious reign.

From Tudor Queens to Pop Princesses, the six wives of Henry VIII take to the mic to rewrite ‘Her-story’. Following a sell-out UK tour, hit pop-concert musical SIX returns to the Arts Theatre.

SIX, ‘The most uplifting piece of new British musical theatre’ (★★★★ The Evening Standard) is the phenomenon everyone is losing their head over!

Critically acclaimed across the UK with a sound-track storming up the UK pop charts, the sell-out intoxicating Tudor take-off is back!

From Tudor Queens to Pop Princesses, the six wives of Henry VIII take to the mic to tell their tales, remixing five hundred years of historical heartbreak into a 75-minute celebration of 21st-century girl power. These Queens may have green sleeves but their lipstick is rebellious red.

The homegrown histo-remixed pop-concert musical by Toby Marlow and Lucy Moss returns to the Arts Theatre, London in January 2019.