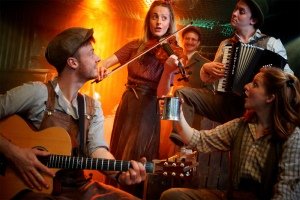 Forty-four characters and five actors. But The Curious Case of Benjamin Button is not as confusing as I’ve just made it sound. It’s possible to read the short story by F Scott Fitzgerald (from which this two-and-a-half-hour musical and an even longer ‘fantasy romantic drama film’ are based on) in a single sitting. Given the controversy surrounding the use of puppetry to portray a human character in a previous production at Southwark Playhouse, it’s a little surprising to find multiple ones in use in this one. It’s a cradle to grave story – except it isn’t, because Benjamin Button’s (James Marlowe) biological development is indeed ‘curious’. But so much is made of the unusual manner of his progression through life that it starts to become rather too repetitive, even by musical theatre standards.

It reminded me at times of the television series Downton Abbey, which also tended to insert key historical events of its time into the narrative. Here, the story starts in 1918 and finishes in 1998 – Button had lived long enough to see New Labour come to power, but for reasons made extremely clear over and over again, he had no idea what that really meant. Other times, the song ‘Seasons of Love’ from the Jonathan Larson musical Rent came to mind, in its measurement of a year of living in ‘525,600 minutes’. There were some very precise details provided, including how many days Button served king and country in the Second World War, and even what time an off-stage character got out of bed (or didn’t in one case, on account of an alarm clock being set incorrectly, such that AM and PM got mixed up).

It is, as you can imagine, difficult to care too much about such trivia, even when it transpires that the show is indeed going somewhere, and such specific elements of people’s lives have (some) relevance after all. Button marries Elowen (Philippa Hogg in her ‘young’ days, Rosalind Ford when she is ‘older’), and they have two children together, Locryn (Matthew Burns) and Lowen: Elowen, which to me sounds like something or someone out of Lord of the Rings, apparently means ‘elm tree’ and Lowen means’ joyful’. These are Cornish names – the story has been relocated from its original 1860-1930 timeline in Baltimore to the coast of Cornwall. There’s even a musical number in the first half and reprised in the second, in Cornish. It is translated, but not in the show proper – one has to turn quite a few pages in the programme to finally see it.

The show does, despite a plotline that could have been easily covered in one act, have plenty of features in its favour. The programme makes clear, for instance, why its puppets have plastic bottles for torsos – the set and props “features items collected from the beaches of North Cornwall”, as part of the Cleaner Seas Project. The musical numbers are often stirring and easy to listen to, and if the producers’ budgets can stretch to it, a cast recording wouldn’t go amiss. The joyous and borderline raucous nature of the songs in earlier scenes does mean, however, that there are almost inevitably darker times ahead – that Game of Thrones phrase, “Winter Is Coming”, crossed my mind.

Having never been based in Cornwall, I cannot vouch for the authenticity or otherwise of the characters’ accents. Either way, there were no problems understanding what was being said and to whom. The production relies quite heavily on description to advance the story, with all of the actors sharing the role of narrator. Accordingly, the scene changes are so slick that no filler music is required during stage movements. But it gets to a certain point before rattling through the rest of the remaining years of Button’s life at almost breakneck speed, which makes the last scenes feel rushed.

That needs looking at: as they sing more than often enough, “It’s all just a matter of time”. In the end, however, the actor-musicianship, melodies and harmonies are exquisite and flawless, and the cast give it their all throughout the evening. It was certainly popular with the press night audience, most of whom rose to their feet at the curtain call and wouldn’t stop clapping and cheering until the company returned for another set of bows.

Discover a sleepy fishing harbour at the end of the First World War – home to a most curious story of one man, and the timeless tale of a love that defies all odds.

Born in the most unusual circumstances, Benjamin Button is an old man, not at the end of his life, but at the beginning. Trapped in a body where he doesn’t belong, locked away from the world and branded a monster, Benjamin dreams of freedom and adventure. And more than anything, he dreams of love. But just as he gives up hope, resigning himself to a life of solitude, a miracle occurs – a local girl, by the name of Elowen Keene.

But, as we all know, time and tide wait for no man, and as the decades pass, their lives begin to move in reverse. And when war calls Benjamin across the seas, time is not their only enemy.

Jethro Compton Productions, in association with Hall for Cornwall, presents
The Curious Case of Benjamin Button
Book and Lyrics by Jethro Compton
Music and Lyrics by Darren Clark
Based on the short story by
F. Scott Fitzgerald.
15 MAY – 8 JUNE 2019
https://southwarkplayhouse.co.uk/