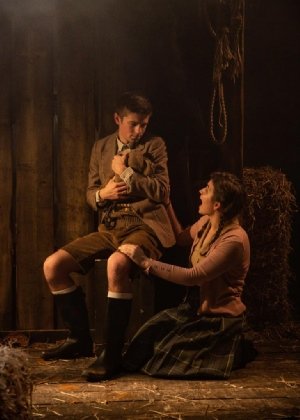 Whistle Down The Wind is, as the programme cover states, is “Based on a novel by Mary Hayley Bell and the screenplay by Willis Hall and Keith Waterhouse and the film by Richard Attenborough and Bryan Forbes”. The novel was published in 1959 and the film was released in 1961 but prior to that, it had been a stage play too. Unusually it has been turned into a musical twice – this version by Russell Larby and Richard Taylor from 1989 and a later version by Andrew Lloyd Webber and Jim Steinman from 1996. This production at The Union Theatre is the former being revived having been produced there in 2015 albeit at the theatre’s previous location just over the road.

Whistle Down The Wind tells the story of the three Bostock children who find an escaped convict hiding in their barn and are convinced it’s Jesus come back to earth. They keep the convict’s secret and beg, borrow and steal food to sustain him whilst he hides from the authorities. It follows their attempts to keep the man’s whereabouts secret from their father and the local police whilst allowing the other children in the Lancashire village to visit “Jesus” in his hideaway.

If the plot sounds flimsy, well it is a little and there’s no underlying subtext to give it some depth. Whilst the book and lyrics are on the whole very good, the music lets it down somewhat. There are few strong melodies and they tend to come when the ensemble is singing. For the most part, it’s almost spoken-sung and at times it feels as if it was meant to be a sung-through musical but Labey and Taylor decided not to go down that route and keep it as a conventional book musical. This means it’s a bit disjointed and there are few songs that linger in the memory.

The performances from the mainly inexperienced cast are mixed with one or two voices not quite up to the difficult, sometimes atonal music and their accents vary, taking us on a tour of the north! The only stand-out is Juan Miralles as “The Man aka “Jesus” but he only sings right at the end and only one complete song “Jesus Protect You Little Children” which is the one memorable song in the whole piece. Using grown-ups to play the Bostock children is probably a necessity due to the complex nature of the songs but the rest of the children of the village are played by actual children and this makes for an odd miss-match.

The real stars of this production are technical rather than the songs and the performers. Justin Williams’ set makes great use of the tiny space at The Union Theatre. Half of it is taken up by an impressionistic depiction of a barn with a stone wall and a wooden, angled roof. The other half of the space is taken up by the dining area of a farmhouse which also works really well. All around the set were little touches such as old wheels, crates, flowers and the paraphernalia of a farm. The attention to detail even continued into the back and sides of the set which whilst it all couldn’t be seen that clearly, added to the feel and claustrophobic atmosphere. Reuben Speed’s costumes are in keeping with the times although they look a little too pristine for a poor, working class farming village just after the war. Hector Murray’s lighting design was in complete harmony with the set and the costumes adding to the ambience of the piece. The actual theatre lighting was used very subtly especially as a lot of the action took place in an unlit barn or at night. The effects were added to by excellent use of candlelight (although using battery operated ones rather than the real thing) and one scene in particular, was lit just by torches with everything else turned off – including the musician’s music reading lights.

All in all, Whistle Down The Wind won’t linger long in this reviewer’s memory with no melodies to whistle down the wind or whistle anywhere else for that matter.

The time is the late 1950s, the place, a small village in Lancashire. Hurrying to a barn with three rescued kittens, Cathy, a schoolgirl, discovers a stranger hiding there. She recognises Him immediately as Jesus Christ and tells her sister, Nan. The next day their brother Charles also learns of their discovery. They decide to tell nobody, but gradually word spreads through the children of the village. Anxious to protect Jesus from unbelieving adults, they keep His arrival a secret and besides, most of their parents are preoccupied with news of a convict on the loose in the area. Trouble starts when the village bully, Raymond, threatens to give the game away . . . Adapted from the famous film and novel, this critically acclaimed musical will enthral audiences with its powerful and moving score and book.