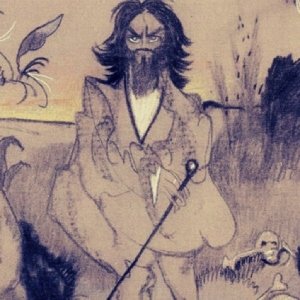 A Deed Without A Name, as the show’s programme informs its audiences, comes from Shakespeare’s Macbeth. Specifically, in Act IV Scene I, the witches consider the religious beliefs of the time. When an infant was christened, they were deemed to have entered the Church: this was also the point at which they were publicly named. For an action to be described as ‘a deed without a name’, therefore, was essentially an assertion that what had happened, or was about to happen, was something unholy, even downright evil.

Far be it from me to give away what the actual ‘deed’ was in this production that was deemed to be so terrible. Stanisław Ignacy Witkiewicz (1885-1939)’s play is as intellectual as it is absurd, deliberately creating a comic picture of a bizarre world in which a new ‘theocracy’ is born, under which all citizens will live. Make of this what you will: this new religion has as its fundamental base a core belief in nothing at all. “No universal boundaries”, so a man referred to as ‘the president’ (Reed Stokes) claims, will set this new religion apart from its predecessors.

Nonetheless, everyone must follow it, and there are therefore two observations that arose in your reviewer’s thoughts. Firstly, a belief in nothing ultimately results in a belief in anything. Secondly, is Witkiewicz making light of the idea that (as some people genuinely believe today, even if they do not realise it) there is absolutely no such thing as absolute truth, a statement that in itself proves there is such a thing as absolute truth? I hope you will forgive me if I come across as over-analytical or pedantic, but the power in this play is not so much in its humour as in its ability to make its audiences think more widely about what the play’s events.

There are some bombastic performances to enjoy, particularly from Dan de la Motte’s Prince Padoval de Grifuellhes (I suspect His Royal Highness’ full name is even longer than that), who bounces around the stage energetically as though he’s on amphetamines, and from Sarah J Warren’s Claudestina de Mountreuil, an abstract painter who commands the stage with an authoritative and reassuring voice.

It’s both the sheer lack of democracy and lack of planning that quickly leads to something approaching anarchy – and, ironically for a society that, at least officially, has nothing as its ‘god’, a situation that could do with several doses of divine intervention of some kind. A scene in which Plasmonick Blodestaug (Giorgio Galassi) is locked up with Rosa van der Blaast (Dorota Krimmel) – for reasons made clear in the narrative – brought to mind the phrase attributed (rightly or wrongly) to Jean-Paul Sartre (1905-1980), “Hell is other people”. Rosa’s frustrations with her cellmate are palpable, and somehow – the absurdist streak shining through again – the cell expands to accommodate most of the rest of the thirteen-strong cast.

Not a second is wasted in a production that moves briskly, gliding through four acts in just ninety minutes – and with space for an interval, which inevitably begs the question as to whether it could have run for seventy-five minutes without one. The international cast, as far as I could deduce, largely retain their natural accents – ‘Centuria’, where the play is based, is, of course, fictional, though it is reasonable to assume it is quite a cosmopolitan place.

In the final act, the extreme possibilities of political unrest become clear – making the production a rather timely one, coming during a period of significant political change in the UK. As the characters gradually leave the stage in the closing moments to uncertain futures, this production is bound to resonate with those who have good reason to believe they are in a similar position. A facetious and relevant production.

“A Deed Without A Name” was written by S.I. Witkiewicz, a famous Polish avant-garde artist, playwright, novelist and philosopher from the interwar period. A dark comedy about the revolution, the downfall of civilisation and the end of free art; where the old social order collapses, the individual is being destroyed and taken over by the masses. The play is a dark comedy, part satire, written in a style of a political thriller, full of intrigues, spies, conspiracies and secret quasi-religious organisations.