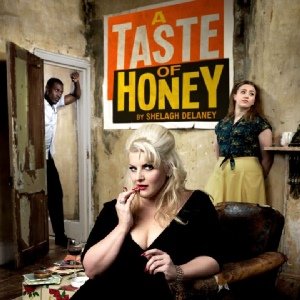 When A Taste Of Honey was first produced at the Theatre Royal Stratford East in May 1958, it caused a sensation and soon transferred to the West End. Written by nineteen-year-old Shelagh Delaney, it was her first attempt at writing a play and she soon got tagged an “angry young woman” (something she hated) and bracketed with the likes of John Osborn and Harold Pinter who were writing working class theatre in direct contrast to the drawing room comedies that pervaded the theatre in the decades before.

A Taste Of Honey must been a bit of a shock for audiences of the time portraying themes that had never been seen on the London stage before. There’s a promiscuous middle-aged woman, a teenager who gets pregnant by a black man and a thinly disguised gay man at a time when homosexuality was still illegal in this country.

The play tells the story of Helen a dysfunctional mother and Jo, her wayward teenage daughter who live a peripatetic life as they move from one grim and grimy flat in Salford to another. Theirs is a combustible relationship who in their verbal sparring with each other, give no quarter. The two male characters who appear in the first act, Peter, a one-eyed wide boy with an eye-patch who is Helen’s latest lover and Jimmie a sailor, who gets Jo pregnant, appear at the fringes of the drama as A Taste Of Honey is possibly the first feminist piece of theatre with Helen and Jo the strong characters and the men, just cyphers.

The problem with the play is that today’s audiences are seeing it through the prism of time. In the sixty years or so since its first production, not only has theatre moved on but society has too. Audiences are no long shocked by the themes in Delaney’s play – they can see far more shocking storylines every night before the TV watershed in soaps like “Eastenders” and “Coronation Street” and it now comes across as a bit of a period piece.

Director Bijan Sheibani has tried to jazz it up with a three-piece band on stage throughout who not only underscore some of the action but also provide the backing as characters burst into song. This is not a musical but a play with songs as they’re part of the action although we only get fragments of songs such as “I’m In The Mood For Love”, “Mad About The Boy” and “Nature Boy”. These work well, giving the play some light and shade. Sheibani has also tried to lift the action with four characters who aren’t listed in the programme appearing every so often to move scenery, bring on and take off bitss of furniture and hand out pieces of costume to the cast. These four turned out to be the understudies so no sitting backstage waiting for a performer to fall ill for them! However, at times this device seems fussy and unnecessary.

As for the cast themselves, Jody Prenger who plays Helen does it at such a pace that allied with her thick northern accent, at times it’s hard to hear her dialogue. Gemma Dobson as Jo is really the fulcrum of the piece and it’s her story that drives the plot and she’s very good. Tom Varey as Peter and Durone Stokes as Jimmie do their best but their characters, especially that of Jimmie are sketchily drawn and they disappear from the stage for long periods. However, the second act does come to life with the appearance of Geoffrey played by Stuart Thompson who is excellent as a teenager confused by his sexuality. Geoffrey befriends Jo, moving in with her and becoming her rock
as her pregnancy develops.

The problem with this production is that the best things about it are the excellent set from Hildegard Bechtler where we almost smell the mould and feel the damp and the on-stage band who give the piece some life. I would love to have felt some sympathy and empathy for the characters but for some reason, the funny lines didn’t make me and the audience laugh that much (apart from the annoying man sitting directly behind me who laughed at everything – even the lines that weren’t supposed to be funny) and the drama of the situation the characters were in, didn’t seem to move the audience either. I’m not sure if this was because of the performances, the staging or the piece itself – it just all felt a little limp and flat.

The National Theatre, producers of Macbeth and War Horse, bring Shelagh Delaney’s ground-breaking British classic A Taste of Honey to Richmond prior to the West End.
“It’s chaotic – a bit of love, a bit of lust and there you are. We don’t ask for life, we have it thrust upon us.”

Jodie Prenger (Oliver!, One Man, Two Guvnors) leads the cast as Helen in a bold new production that features original music compositions – influenced by blues and soul – and rearranged songs from the jazz era, performed live by the cast and an on stage three-piece band.

Directed by Bijan Sheibani (Barber Shop Chronicles), this exciting new staging is a gritty depiction of working-class life in post-war Britain and an exhilarating portrayal of the vulnerabilities and strengths of the female spirit in a deprived and restless world.

When her mother Helen runs off with a car salesman, feisty teenager Jo takes up with Jimmie, a sailor who promises to marry her, before he heads for the seas. Art student Geof moves in and assumes the role of surrogate parent until, misguidedly, he sends for Helen and their unconventional setup unravels.