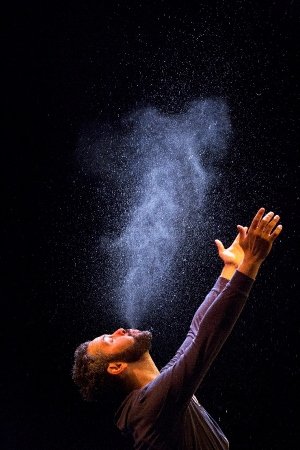 There’s a certain friendliness about Canadians (if you still haven’t seen Come From Away, it’s worth seeing) that is sometimes parodied in American television shows. In an episode of the animated sitcom Family Guy, a prisoner points to an exit and asks an officer, “Can I go through here?” The response comes back, “Just be back by bedtime,” and the prisoner agrees to do so, before leaving the premises. There is another sort of Canadian, however. In Daughter, Adam Lazarus spins a hard-hitting (in more ways than one) narrative, with a directness that a British production might struggle to match without coming across as being provocative for the sake of provocation, or otherwise just taking the mickey.

The show begins in such a relatively light-hearted manner that quite quickly I wondered if things would become darker (and then I recalled that this is actually billed as ‘a darkly satirical piece’). But I could not have predicted the manner in which the story became highly emotive, not least because I struggled to connect the various ‘dots’ in the narrative. For a long time, Lazarus’ narrator talks about himself and his life experiences, and the audience doesn’t seem to learn that much about the daughter of the show’s title other than she likes to listen to music, likes to dance to the kind of music she enjoys, and is the sort of prepubescent girl who irritates and inspires her father in equal measure.

Indeed, there’s more detail about his wife’s labour than there is about the little one – for whatever reason, perhaps for dramatic effect, perhaps for good measure, there’s even a demonstration of how fierce his wife’s screaming became as she cried out in considerable pain. Part of me wondered if that was really necessary. Then again, why not? Having seen a few shows recently which prefer description over dramatization, I found the varied approach taken here certainly helped with maintaining interest.

Still, it could be a little more focused. At one point, he starts talking about miscellaneous experiences during his childhood, before going on to express a desire to live out his twenties again so he can get out there and paint the town red. Some stories, but by no means all of them, have some correlation to what happens later in the play, but other threads are pretty much forgotten about. The play therefore comes across more like a stream of consciousness than a structured piece of theatre, with thoughts briefly explored and then abandoned as the narrator thinks of something else.

There’s no doubting, however, that Lazarus’ animated and engaging manner very much helps in a show whose content would otherwise make it easy to switch off and think of something pleasant instead. Some of the narrative is not for the fainthearted: it is relatively rare to hear such marked audience reactions to events being described. But then again, it is also relatively rare for the consumption of excrement (not, thankfully, dramatized) to end up being one of the milder incidents in a show.

What is discussed in the latter half of the show becomes quite grotesque, even criminal. It is no coincidence that the amount of invitations for audience feedback and response decreases as the shock factor goes into the stratosphere. This is certainly not a show for everyone – things do get genuinely ugly – though this production does bring to the table the sort of uncomfortable issues that don’t (sometimes for good reasons) often get explored on stage. Raw and uncompromising, there’s much to discuss on the journey home after the show.

Adam Lazarus plays The Father in this darkly satirical piece distilled into the figure of a very funny, engaging and deeply troubled man.

Through his powerful account of fatherhood, violence and love, we come to recognize the ingrained misogyny we see everywhere — within society, within our communities, and perhaps, for some of us, within ourselves.