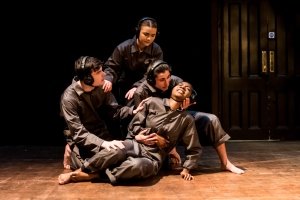 Feeling Lonely at Parties is back and this time it’s playing at The Space Arts Centre near Canary Wharf. The production is a devised piece of physical theatre, just shy of 60 minutes in length. It’s an ensemble piece with a cast of 9 emerging artists from Middlesex University. The show is promoted as a production where “five broken individuals seek love in the face of oppression.” I’m not sure that I interpreted the production in the way it was meant to be received, neither did my +1.

I was really excited by the plays title and their promotional blurb; I really wanted to see this production, however, for me it fell short of my expectations and what started as a really interesting and carefully devised theatrical study of how people are controlled by the media, turned in to a bit of a far-fetched sci-fi version of 1984/The Truman Show/Doctor Who. For the first 25 minutes or so I would have given the piece 5 stars, but frustratingly by the end I was ready to leave and the piece had lowered in my estimation to 3 stars.

The cast has a mix of really talented performers, in particular Stefano Puppio – who was magnetic, whenever he was on stage I could only watch him, his craft is extraordinary and really well-honed. Also worth mentioning are our two lovers Bryan Carvalho and Joshua Wainwright. The cast are all of a similar age and are dressed in boiler suits; our protagonists in a shade of grey and our antagonists in black. All the boiler suit people are wearing large headphones which are attached to their head in a way that looks like they are a permanent fixture in their universe.

Music is pumped through their headphones which we are always able to hear. This soundtrack to our show, is the soundtrack to the characters’ existence.

Also in this universe is a Puppet Master – a controller of the music so to speak. This character is portrayed by Pedro Araujo Santos, he performs with a vitriol and menacing presence, pure evil and dominance. He doesn’t wear a “uniform” and isn’t wearing any headphones and as the piece continues we see his belligerent and cruel character develop and worsen.

Their Universe is a dystopian holding pen for people who are forced to wear headphones, characters perform menial tasks and interaction with other people is not encouraged. As an audience we quickly see that the music that is transmitted through their headphone controls their actions and mood fully. There is no escape. People are told when to get up, how to move, who to interact with and and what speed/beats per minute. It really reminded me of 1984 and the controlled way of living.

For me the standout moments in the production are when we meet our lovers, Bryan and Joshua. The coupling of these two is a dream to watch, their partnership is pure joy and brought a huge smile to my face – watching them learn to dance together then become more intimate made me feel embarrassed to witness such intimacy. I really did feel that I was a voyeur secretly watching something not meant for me. This was a spectacular onstage moment, their joy, their tenderness, their onstage connection and presence.

About half-way through the production, it felt to me like they weren’t sure how to continue the piece and from what was a very controlled physical performance, I began to feel frustrated. There was intermittent shouting, and sighing that wasn’t needed and hugely distracted from their controlled mime, movement and physicality. They also seemed to change the rules in their universe and were behaving more in line with superheros from the DC Universe throwing lightning bolts at each other – for me this didn’t fit. However, saying this, my +1 really enjoyed this.

To me it felt like the final 5 minutes was them just filling time and I lost all sense of what I was watching, such a shame when the show displayed such hope at the start.

I would be keen to see more work by Pursued by a Dragon, and even a revisit of this piece after it has been visited by a dramaturg.

In a dystopian future, where people are forced to listen to music to regulate their mood, five broken individuals seek love in the face of oppression. Reflecting how relationships are affected by today’s society, Feeling Lonely at Parties is a story without words, which takes its audience on a journey from mania to melancholy before reaching its uplifting conclusion. Stunning physical theatre with a cleverly woven soundtrack, this new version of the show has been created by international ensemble Pursued by a Dragon and follows a successful run at the Camden People’s Theatre in July 2019.

Pursued by a Dragon are a fresh collective of emerging artists dedicated to telling fantastical stories and increasing access to the arts. Formed at Middlesex University, this international group create theatrical shows that tell stories using different disciplines. Pursed by a Dragon are passionate about exploring important themes and giving a voice to the under-represented.