Home » Reviews » Holly Morgan: Is A Witch, Get Her! at the Vault Festival 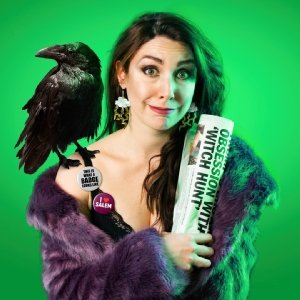 Holly Morgan’s third venture at the Vaults Festival offers an informed and terribly amusing look at the history of witches, charting their inception in the middle ages to the modern witch of today. The premise is simple – travel
through time to unpick how witches (and the practice of witchcraft in general) have morphed from their original depiction of herbalists (healers – arguably an all-round selfless kind of person, no?) into the somewhat more sinister embodiment of evil. Where did this idea spring from, Morgan asks – and who created it?

Cue the patriarchy, religion, misogynist Kings of old and (of course) Donald Trump.

Through the amusing presentation that follows, Morgan, along with her husband Tom Moores (dressed rather fetchingly as a cat), take us on a whistle-stop tour through the ages, imparting surprising facts, divulging jaw-dropping snippets of scripture, and delving into the famous (and sometimes not-so-famous) witch trials across Europe and the United States.

Yet the show is not just one long, drab Ted Talk; the pair maintain their own unique style and add a nice personal touch via photos of their honeymoon to Salem, some fabulous impressions, an array of impressive vocals, and some big LOLs. Neither is this show without substance; Holly Morgan is a young Caitlin Moran, stomping about the stage in her doc martens, whilst pointing one long witchy finger at the patriarchy and lamenting the sheer injustice – the LUNACY – of the on-going witch hunts across the globe (Tanzania is a particular example). Her message is clear: witches were created as scapegoats for the heinous acts of power-hungry men. Just look at Donald Trump’s Twitter feed.

As a woman, Holly is a witch. As someone that could potentially rock the patriarchy, so are you. And as a coven, should we not try to kill the beast with kindness? Holly thinks so, and after spending an hour being rather bewitched (sorry) by this show – so do I.

Holly first realised she was a witch when she hit puberty.
Suddenly everyone knew she was a witch and were not afraid to say so. From the other girls at school, to the men
she wouldn’t show her tits to on the bus, Holly Morgan was a complete witch.
‘Witch, please,’ she thought, ‘if i’m a witch, there must be others.’