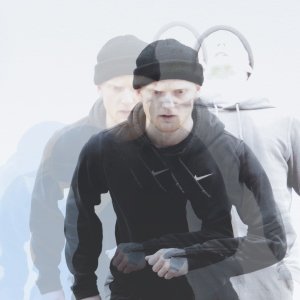 I Run wasn’t the first solo performance at this year’s Vault Festival that I came across that involves running a marathon. Except there’s been a tragedy in this runner’s family. Dad (Max Keeble), for he is only known as Dad in this first-person narrative, has lost his daughter Ellen. By ‘lost’, I don’t mean a police appeal has gone out on social media, but that she has lost a battle with leukaemia. This is not, of course, the natural order of things for a parent to bury their own child.

One of the points this play wants to make is about dealing with death and exploring why it is difficult to have conversations about it. My immediate response is that there is going to be a perfectly understandable aversion to discuss things that are uncomfortable. Further, there are people who find it difficult to talk about anything personal, while others are just natural talkers. This is one of those plays that just can’t tell a story in chronological order, and flits between ‘Day Zero’, when Ellen dies in hospital, and the time period spanning from 801 days before to 750 days after (more or less four years and three months).

At least the production has a way of making clear exactly where the story is at any given point, simply by having screens that tell the audience what day is being described. In terms of staging, there are those screens, a man in running gear and a treadmill. He carries on running and talking, talking and running, and it soon becomes clear how physically and psychologically demanding this play is on the lone actor. But even this, or so he tells the audience, pales into insignificance relative to the pain his daughter goes through as it becomes evident that the course of treatment for cancer has not been successful.

In the flashback scenes, when (for instance) Dad and Ellen are at the doctor’s discussing blood test results, there’s a respite from the treadmill pounding, though Keeble never leaves the treadmill – if the narrative dictates that he stops, his legs are on the frame of the machine. As people who have suffered loss and bereavement tell me, there is something odd about how the world carries on – the radio plays the latest ‘number one’, there is work to be done, there are bills to pay – and yet there’s no doubting the significant impact the loss has on relatives and close friends. Here, the treadmill keeps whizzing, sometimes at high speed (and thus very much audible) but Dad is at a standstill, the pain both figuratively and physically leaving him immobile.

As I say, there’s nothing else to look at, so one’s attention is by default very focused. Dad gets injured, or otherwise, he stumbles because either his mind or his body (or both) can’t continue, especially as his thoughts return repeatedly to Ellen and her short life. The storyline also touches on Dad’s relationships with his wife Freya (strained to say the least) and their younger daughter Alice, and as ever with solo performances with solo perspectives, the audience doesn’t get to know what these women ‘really’ thought about Ellen, about life, and about Dad relentlessly going out and running in all weathers.

I found this to be an incredibly moving (sorry) and absorbing piece of theatre, an intense but also surprisingly invigorating experience.

Cut the Cord presents I RUN, a new Danish play by Line Mørkeby shining a light on how we talk about death.
A dad loses his 6-year old daughter to cancer, and his world falls apart. He doesn’t know how to process the life-shattering void following her premature death. He starts running to deal with his loss. Only, he can’t stop. He runs through the pain, the memories and the grief to try and find the point where he no longer runs, but soars – the point where he is close to her again.
I RUN is a fast-paced, explosive and moving one-man play about running, grief and missing someone we love. About how you survive the death of your child. It explores how exercise can improve mental health, the rise of male depression, and why we find it so hard to talk about death.

This piercing piece of new writing by award-winning Danish playwright Line Mørkeby is brought to the Vault stage for the very first time, following its UK premiere at Drama Centre London in 2018.