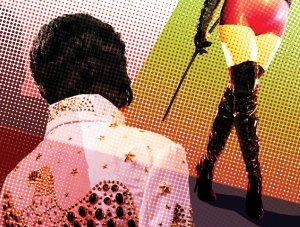 How wonderful to be able to go and see a play where one can sit back, relax and really ENJOY it! This play does exactly what it promises: it entertains, firstly because it is beautifully written and constructed: no scene is a moment too long; secondly because we quickly empathise with all the characters, even if they are larger than life; and thirdly because it is not only extremely funny, it also has moments of real pathos, especially in the second act. Yet, in spite of winning a ‘best play’ award for its author, Charlotte Jones, who more recently penned Humble Boy, it has never been professionally staged in London: until now!

Josie’s Irish cleaner, Martha, totally lacking in self-confidence, is hilariously portrayed by Sioned Jones, who has a very expressive face and is able to make the most of her dialogue.

Lionel (Andrew P Stephen) looks just like the owner of a dry-cleaning establishment, and makes the most of his bald head! Jessica Forrest has superb physical energy and demonstrates the art of comic timing in the role of Louise, about whom I will say no more as it would spoil the plot, and Matt Lim (Timothy) is suitably nervous in his role of the Chinese (in fact Vietnamese) Elvis. The fact that he only knows a few of Elvis’ songs, and bears little physical resemblance to him, until Act Two, matters not one jot: as with all the rest of the cast he is totally in role and appreciates the style of the play.

Much of the success of this production is due to the imaginative direction of Robert Wolstenholme, who speeds this two hour play on its merry way with a lightness of touch that is all too often not apparent in comedy these days.

The simple, yet highly attractive yellow and orange set (Amy Mitchell) not only looks good but also is easy to use, aided by imaginative lighting (Nat Green) that brings out the few more serious moments.

In short, a highly enjoyable evening and great seasonal entertainment, if mainly for an adult audience! It was a shame that the budget would not run to even a simple programme: this production deserves more than just a free cast list!

But her favourite client Lionel insists on a birthday party and, knowing Josie’s a huge Elvis fan, invites a very special guest. Just as hips start swinging, somebody no-one expected arrives and skeletons come tumbling out of the closet…

Writer of Humble Boy (National Theatre) Charlotte Jones’ hilarious and heartfelt comedy about finding a place to fit in won the 1998 Pearson Best Play Award and, on its twenty-first anniversary, receives its first ever London production, from comedy specialists Signal Theatre Company.

Quirky and kinky, and with a rocking Elvis soundtrack*, this sweet yet saucy celebration of life’s outsiders is the perfect ‘adults only’ alternative Christmas treat. (*NB: is NOT a musical!)

After an absence of two years, it was so good to be back under Waterloo Station at the first week of … END_OF_DOCUMENT_TOKEN_TO_BE_REPLACED

After creating the “absorbing and provocative” Version 2.0 and the “eminently lovable” Letters, … END_OF_DOCUMENT_TOKEN_TO_BE_REPLACED