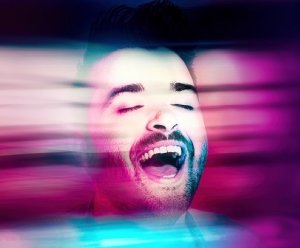 I once saw a motion picture in which someone proposed to their long-term partner in a nightclub. I wondered how realistic this would be: where would one find the floor space in such a crowded place to get down on bended knee for any length of time, and could the question be heard? Given that conversations in clubs tend to consist of people yelling into one another’s ears, it just seems to me to be an inappropriate place to get romantic. Mind you, neither Connor nor Rob (both Alex Roberts, going as far as doing both sides of a conversation with a slight and simple but effective costume change with each line) have necessarily set out to do anything other than clubbing. But there are times when sparks just fly, and it is for the parties involved to live in the moment. After all, we only live once.

No Place Like Home also sees Roberts narrate the play, but the production overall is more slanted towards dramatization than mere exposition. Some of the music used in the play resonated with many in the (relatively) late night Camden audience, perhaps for sheer recognisability (even I can recognise a Whitney Houston tune as it rings out across the theatre) and/or because it changes to fit the narrative – when the younger Connor steps outside, for instance, the loud dance beat suddenly becomes muffled. It’s that kind of attention to detail that makes the production all the more compelling.

While the night out doesn’t exactly end as merrily as it began, the play asserts that while this may be a story about what went on at a gay bar, there isn’t that much that is different, sexual identity aside, between that and a Friday night at a ‘straight’ bar: there is still the awkwardness of getting to know someone one meets for the first time, and there is still the speed and unexpectedness with which things can go awry. Roberts’ performance got very physical at times – unless, like yours truly, one is occasionally dragged along to a night out of this nature, there’s inevitably going to be some dancing involved.

A karaoke number went down a storm with the audience, starting off ‘badly’, as the most entertaining karaoke performances tend to do, before eventually demonstrating what Roberts is truly capable of. The use of video projections (Virginie Serneels) is extensive, which in some ways is just as well as there is nothing in the way of a set. The show’s critical incident gives rise to an exploration of violence within an LGBT+ context. There aren’t, of course, any straightforward solutions but there is considerable food for thought in this brief, somewhat intense and highly compelling performance.

It’s 2015. Whitney Houston pumps through the speakers of one of the biggest gay clubs in the city. Through the maze of fuck boys, cheap shots and drag queens – Connor meets Rob.
One’s a newcomer. The other has been on the scene far too long.
But in here their differences don’t matter. Do they?
Fusing Spoken Word, Dance and Original Music No Place Like Home is a solo performance about the underbelly of queer nightlife and asks; are bars and clubs still the place all queers can call home?

The show was originally created for Starting Blocks 2o19 at Camden People’s Theatre and has been supported by the Marlborough Theatre and Arts Council England.

Further Information on No Place Like Home:
No Place Like Home is an hour-long solo performance that combines Spoken-Word Poetry, Dance and Original Music. It tracks a chance encounter between two queer cis males on a night out in the city and examines how their relationship turns violent in the space of an evening.

The show has been inspired by the death of Billy Mankelow, a student at Leeds University who lost his life in the Viaduct, one of city’s biggest LGBTQ+ venues. He was murdered by a man called Richard Danter, a bartender who worked there. Both men identified as LGBTQ+. No Place Like Home is a response to this story and although based on true events the characters and places depicted are fictitious.

We are also supported by LGBT+ Switchboard, the telephone helpline and Galop, the LGBT+ anti-violence charity.
https://www.alex-roberts.co.uk/